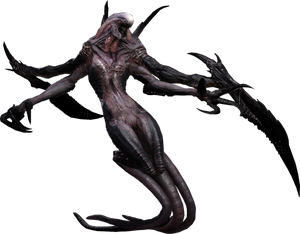 Evolve
The Wraith is a female alien monster that escaped its confines on Shear, and is one of the top predators of the planet, much like Goliath, Kraken, and Behemoth. Like them, she is able to "evolve" into two higher stages, strength and appearance changing with each one. She is the fastest of the monsters, though is also the weakest.

Being the only female monster to have escaped, Wraith has a slight feminine look to her body, with tentacle-like legs, and a extra set of scythe-like arms. Despite appearances of the head, Wraith indeed has eyes, though she can't open them directly until she evolves to her second stage, which by then the skin is removed off of them. Wraith's skin has an eerie resemblance to human skin, with the head having a reptilian-like look to it, muscle visible on the neck and shoulders.

Wraith has a full arsenal of psychic abilities at her disposal, many of which most other monsters don't possess. In order to move, she is able to float just above the ground. She is also capable of traveling at warp speed, about 178mph during warp speed. Other abilities available to her include turning invisible, setting clones of herself to fight in her stead, creating explosions after a warp, sucking life out of prey through psychic interaction, and able to give herself a 'supernova' - increasing her attack and speed within a psychic dome.

Retrieved from "https://aliens.fandom.com/wiki/Wraith_(Evolve)?oldid=194901"
Community content is available under CC-BY-SA unless otherwise noted.