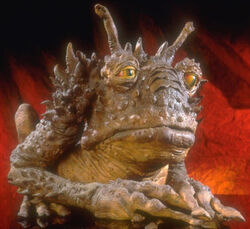 Star Wars
Worrts are amphibious organisms found on both Tatooine and Nal Hutta, one of which being its homeplanet, although this is up to speculation as some sources will state one while others may state the other, adding confusion to the mix. They are omnivorous, but are equally capable of consuming rocks and metal objects, although this would lead to the demise of many a Worrt. It catches living prey with a long tongue, so long as it is smaller than themselves, while larger prey would be attacked normally. They also possess venom which tastes like Tricopper and is strong enough to kill a Bantha.

While it is done with great difficulty, Worrts can be trained as housepets. One famous keeper was Jabba Desilijic Tiure, who kept a number of them as pest control, exploiting the creatures' lightning-quick tongues. They counted the Ibian, a species indigenous to the planet Tatooine, amongst their prey.

There are rumors that abound about giant Worrts - much larger than 1.5 metres in height - roaming the tops of the barren mountains of Tatooine. Given the general likelihood of rumors to be true in these sorts of situations, this is very likely to be true. There are also an aggressive species related to the Worrts known as the Sevorrt.