Alien Species
Register
Don't have an account?
Sign In
Advertisement
in: All Tomorrows Universe, Non-Sapient Species, Extinct Species,
and 10 more 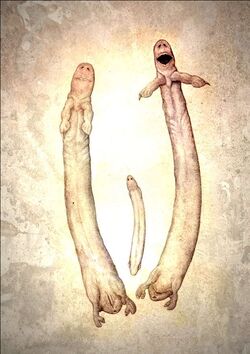 Slightly longer than a human arm.

Evolved into the Snake People

Nemo Ramjet
The Worms were one of the posthuman species created by the Qu from a colony of the Star People.

The Worms lived on the hot desert world that was once inhabited by their ancestors, but remade by the Qu into an even harsher world full of dead cities. But thanks to crystalline plants, there was still enough oxygen in the atmosphere for subterranean animals to survive.

As their name implies, the genetic engineering of the Qu made these descendants of the Star People look like worms, barely longer than the arms of their ancestors. Their elongated bodies sported small arms and legs modified for digging. They have a pair of small black beady eyes on the top of their heads, two nostrils at the bottom, and have completely lost their teeth, external ears and most of the nervous system of their ancestors. They also have either a horizontal or vertical slits where the genitals would be though which one is the male or the female is unclear.

Lacking the sapience of earlier humans, they only dug through the ground, devouring everything they found, sometimes even other Worm People if they did not mate with them.

After millions of years, the heat of their world cooled down and animal life returned to the surface. The worms evolved into a species of tree-climbing snake-like creatures and eventually re-evolved human intelligence. They became the Snake People.