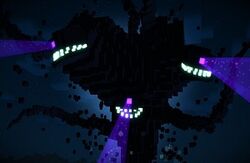 Minecraft Universe
The Wither Storm was a massive sub-species of the standard Wither created through accidental measures. During its lifetime, it managed to pillage a large majority of the Overworld, assimilating hundreds of species into itself to grow its size and power. It was eventually killed by a group of young heroes known as the Order of the Stone by destroying its artificial command block power source, from which the Wither Storm drew its power.

A massive living storm, the Wither Storm was covered with a large layer of black skin that surrounded the creatures' entire body. This skin was highly tolerable, being able to withstand severe amounts of damage to its body. This resistant layer of skin was made up of several different species of plants and animals that the Wither Storm had captured and assimilated into its skin, creating several layers of strong, tolerable skin. The Storm also had three heads, each with a single purple eye and gigantic mouths filled with several rows of bioluminescent teeth.

Note: This section is being expanded.

The Wither Storm was first created through an accidental series of events. Opting to take revenge against the elite Order of the Stone, a single man named Ivor managed to create an altered species of Wither by placing a large power source, known as a Command block, deep within the Wither's chest that would allow Ivor to control the Wither and to better amplify its power. Unbeknowest to Ivor, however, the Wither would be unable to contain the power within its chest, and slowly began to lose control of itself. As Ivor continued to utilize the Wither, the creature's power continued to be amplified by the command block until it completely succame to the command block's immense power. While it was attacking Gabriel, a member of the Order of the Stone, the modified Wither began to shift, slowly morphing into a massive, hulking beast, eventually transforming into the Wither Storm. Upon fully transforming, the Wither Storm went on a rampage, becoming independent from Ivor, the Wither Storm began to assimilate several nearby plants and animals; including Chickens, Horses, Creepers, and even humans, using their biomass to expand itself and grow its power.

Retrieved from "https://aliens.fandom.com/wiki/Wither_Storm?oldid=189589"
Community content is available under CC-BY-SA unless otherwise noted.