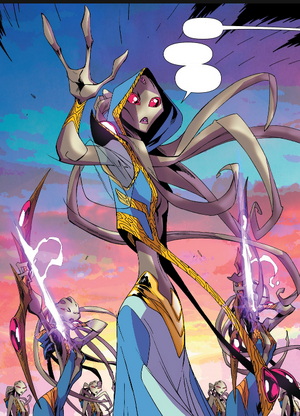 Stan Lee
The Witches also known at Witches of Arbor are a sapient alien race from the Civilization.

The Witches are green humanoids, all seem to be females, with long tentacles cascading down their heads.

The Witches live in temples of their homeworld, and focus their attentions on learning to harness the fundamental forces of the universe through nothing but their own willpower.

The Witches were persecuted during the time of Bin Ydict's rule. They eventually joined alongside the other minority races and overthrew the Humans and House of Bin. The Witches later became one of the members of the Ruling Council of the Civilization.

Retrieved from "https://aliens.fandom.com/wiki/Witch_(Stan_Lee)?oldid=186382"
Community content is available under CC-BY-SA unless otherwise noted.