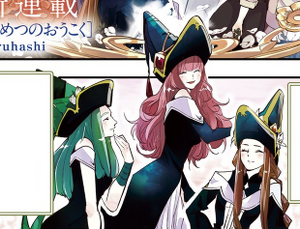 The Witches are a species that once lived peacefully alongside humanity.

Outwardly Witches resemble beautiful human women, though they are in fact different creatures capable of using magic. Thanks to the powers Witches are able to accomplish many feats and even survive in a vacuum.

Witches are born with only one gender, from fruit born of the Mitu (Great Trees of Life). Death for Witches is not permanent and are able to be reborn through the Mitu, though a process like this takes time.

According to myth in the beginning when God created Man and Witches, that latter who was shared God's power in order to protect humanity. For countless years the Witches heeded God's wishes until the rise of Lydian Empire which began to advance technologically and led to the proliferation of smart machines and digital technologies which was called the Gear Expansion. Among the technologies was the Magical Photon Inhibitor SDAM-2 which nullified magic.

Under the tyrannical rule of Emperor Goeth the 23rd ruler of Lydia, the despot called for the genocide of all witches deeming them necessary for the rule of mankind. He stated that the only way for humanity to be free to claim their destines, was to wipe out all the witches. Under this decree witch hunts were conducted by the empire. Soldiers of the empire saw to the deaths of thousands of witches who were once their guides and teachers. They were hanged, their ends celebrated as the Witch Hunt Celebration. The Witches under the influence of the magical inhibitor were helpless before the soldiers of the Empire who proceeded to rape and murder them to their pleasure.

The empire pogrom of witches did not end and refused to allow witches to escape their borders, determined to hunt and display them before the masses to vindicate their kills as progress for humanity. Their greatest hunts led to the captured of Chole the Witch, one of the greatest practioners of magic and her disciple Adonis. The Magical Photon Inhibitor preventing Chole from retaliation, the Emperor stripped Chole of her clothes and humiliated her before the public and across digital media. He declared the eradication of witches to be complete and unceremoniously executed her before a firing squad. Despite the emperor's monstrous actions, he did promise to allow Chole's apprentice to live, who swore revenge of mankind for their crimes and arrogance.

Ten years after all the Witches were supposedly exterminated, contrary what Emperor stated, the the Lydian Empire's rule did not usher a utopia as promised. The empire though advanced technologically, degenerated morally and into decadence, invading other nations, conquering and enslaving its brothers and sisters. Humanity suffered continuous wars and subjection to slavery. An example of the degeneration of the Empire, was it's treatment for female gender, containing entire prisons whose's conditions were inhumane and inmates only purpose was to serve as brothel slaves.

Adonis the Disciple of the Witch who had been kept in stasis by the Empire was freed by an undercover witch. The wizard seeking vengeance for the murder of his master, proceeded to rampage across the Nightmare Capital releasing magical attacks upon the humans. To stop and have a chance to kill him, the Empire attempted to reactivate the Magical Inhibitor but faced interference from the Department of National Science. The Magical Photon Inhibitor was revealed that will it rendered magic inert it actually produced nuclear protons that created a syndrome that severely degenerated the human cells. All those soldiers and even the Emperor who used the device to hunt witches were afflicted. In fact the Empire's elimination of the witches was their doom, as they were the only beings capable of cleaning this energy and restoring the natural environment.

Despite the risks the humans reactivate the device and Adonis was once again powerless, however another undercover witch named Anna faked his death and sent him to the Moon where the Witch Nation of Minamilia existed far from humanity. Apparently the entire witch race relocated to the Moon to avoid persecution bringing the last Mitu to propagate their species. However even that was not safe for long as the Empire used technology to teleport there and destroy the last Mitu announcing the end of the Witches.

Retrieved from "https://aliens.fandom.com/wiki/Witch_(Hametsu_no_Oukoku)?oldid=188974"
Community content is available under CC-BY-SA unless otherwise noted.