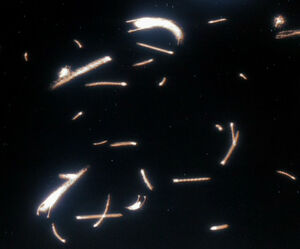 Star Wars
Wisties, a.k.a. Firefolk, are a friendly species of diminutive fairy-like elementals from the forest moon of Endor. Apparently created from fire, they're nevertheless safe to handle, and are prone to provoke tickles, as they feed on laughter.

Wisties are a biologically-unusual species and it's not clear whether they're made of solid matter at all, given that they can both produce and reside inside flames. Physically, they appear as flickering fairy-like humanoids which seem to be made out of light. Although they do have wings, these are not always visible when not in use. They're small enough to easily fit on the palm of a Human child or Ewok.

Wisties are all-female, and tend to gather in large numbers as they fly through the night skies like swarms of insects. Like insects, they're also easily attracted to campfires.

Despite their association with fire and flames, Wisties don't usually produce significant amounts of heat, and are therefore safe to handle. However, angered Wisties can and will set objects aflame. When they fly around people, they have a tendency to provoke gentle tickling, which is one way to generate the laughter that they feed upon.

Fittingly for a species that feeds on laughter, Wisties are friendly creatures. Like most sapients, they live in societies and may experience loneliness if separated from their kind. They're an all-female species and are ruled by a queen. They're generally friends and allies of the Ewoks and may join forces with them to defend Endor against invaders.