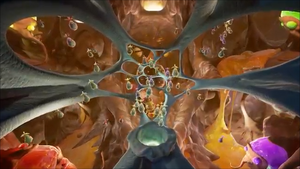 Wisple are, like Earth bees, fairly small creatures. Normal wisples have a simplified appearance, which is a dewdrop-shaped body with a short tude-like mouth. They fly around by spinning their petal-like membranes in a circular motion, much like a helicopter. They can be observed flying in line with eachother

The Wisple queen is notably larger than the other workers, with a two-segmented body, a pair of arms, a head mirroring a normal worker Wisple, and on her head a reddish growth that resembles a crown.

Wisples hold a number of similarities to bees and hornets: worker Wisples bringing food back to the hive to presumably make honey (which seems to be the case as you look into the hive). They'll happily take food offered to them by you, and when given a "Wisple toy", the Wisples fly and bob in tune with the music playing as they fly pass.

Retrieved from "https://aliens.fandom.com/wiki/Wisple?oldid=170621"
Community content is available under CC-BY-SA unless otherwise noted.