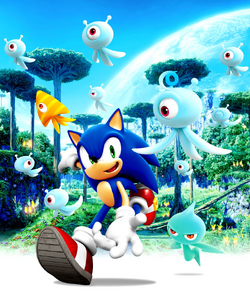 Sonic alongside several Wisps, including White, Cyan and Yellow.

Wisp are an alien species that Dr. Eggman (whom they refer to as Baldy Nosehair) abducted in order to power his interstellar amusement park. Numerous types of wisps exist, which include the White, Yellow, Cyan, Blue, Green, Pink, Purple, Violet, Orange and Red wisps. A notable Wisp is Yacker, a White Wisp who helped Sonic save their planet.

Wisps mostly move around through flight, although the majority of the species are capable of granting mystical powers known as Hyper-Go-Ons; these special types of energy have various effects, including elemental manipulation.

Retrieved from "https://aliens.fandom.com/wiki/Wisp?oldid=184321"
Community content is available under CC-BY-SA unless otherwise noted.