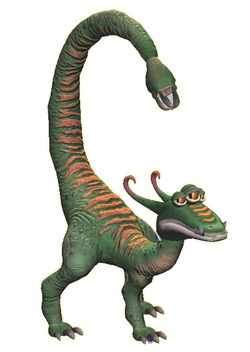 ~Size of a large dog

SPORE
The Willosaur (less commonly referred to as the Willosaurus or Tripod) is a tripedal, triocular carnivorous creature that evolved on the planet of Tamaran.

During the early history of life on Tamaran, a cellular organism arose who proved itself amongst the plethora of other organisms vying for survival. Finned with two eyes on elongated eyestalks, they hunted their prey with a deadly proboscis, which they used to pierce into the cellular membrane of their intended victims. Eventually they became apex predators, and entered the land of the macroscopic.

The ancestors of the Willosaurs spent some time in the oceans of Tamaran, swimming about like a seal. They had gained an extra eye to aid in visual ability, and were very likely carnivores. Eventually, their fins evolved into hind legs while their tail fin transformed into an overhanging grasper, and a third and final leg grew out of their chests to add support to their structure. At this point, they came to land.

Early land-dwelling Willosaurs hunted Tamaranian Hoppers, but they were prey of the much larger Tamaranian Ticks. Somehow, however, the race endured, and once again became the dominant species as they reached sapience and built themselves a civilization.

Willosaurs quickly progressed through their civilization through reasons unknown, and quickly established both weapons and music, as well as dance, early in their tribal existence.

Soon, the planet was dotted by great cities, and eventually, two cities took to war with each other. While the war was in working in favor of the industrialist nation, but somehow the aesthetic nation discovered the way to unlock the secrets of building stellar craft, and with its launch came the downfall of their enemies. Now cruising amongst the stars, the Willosaurs proved themselves to be sadistically curious and vengeful.

One such example was when they abducted a Tick and dragged it unwillingly in their cargo hold to Frore, a planet at the edge of their planetary system, and dropped it onto the planet surface below. After a few mere seconds of agonizing twitching, the Tick exploded violently; this had all turned out to be a cross between revenge and discovering if Frore had a sustainable atmosphere in a most unconventional way. With that, they quickly placed down a domed colony city, and worked towards pooling their resources in a Genesis Device, and soon transformed the barren Frore into a world of unimaginable beauty.

Their second example of their sadistic behavior came about when they discovered interstellar drive technology, and progressed for the first time out past their own star. Using listening tools they had developed at an earlier stage in their existence, they listened for a while, but did eventually find what sounded like it could be a radio signal from another species. With this in mind, they went and visited the strange world. Here, they hovered above a major city. In an attempt to communicate with the species below, they decided that music would communicate their intent better than words the other species would not be able to understand. With that, they blared music through their ship and into the city below; unfortunately, this had the opposite effect from what was hoped for, and the Willosaur "UFO" shot far into the atmosphere above the planet to escape the race's laser blasts. It was here that their sadistic and vengeful nature shown through once again, and with the single press of a button, they fired their most devastating weapon they had at their disposal. Within seconds, the entire planet exploded in a shower of rocks and debris, becoming a ring of useless asteroids circling the sun, not unlike the other one that already existed.