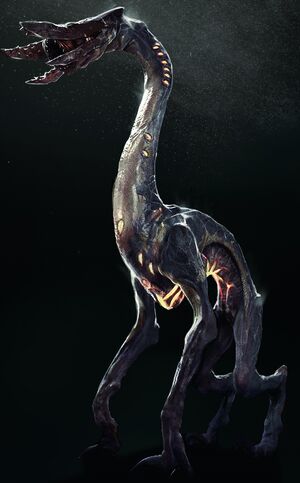 The Whiplash is one of the Aliens that appeared on Planet Earth after the giant meteor crash during 2031 in the Earthfall Universe.

Whiplash are gangly, tall alien lifeforms, standing tall enough to tower over a Human Being. They move on four thin legs, the front legs ending in large claws. They also have long necks that end in a jawless, circular mouth filled with sharp teeth, and four tentacles surrounding the mouth. Several luminescent spots can be seen around the body.

Retrieved from "https://aliens.fandom.com/wiki/Whiplash?oldid=170625"
Community content is available under CC-BY-SA unless otherwise noted.