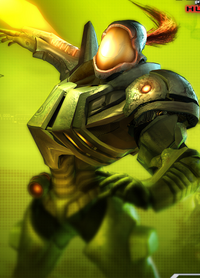 Metroid
Weavel was once a Space Pirate, is now a cyborg, and has been a bounty hunter.

As a Space Pirate, Weavel was a powerful general. However, during a skirmish with Samus Aran, he became severely injured, and only his brain and spinal cord remained and were put into a mechanical body.

Weavel, as a bounty hunter, received the call to find the key to ultimate power in the Alimbic Cluster. He set off to find the eight Octoliths, and ran into Samus Aran in the process. He wants it to revenge against Samus.

Weavel's weapon is known as the Battlehammer. Similar to Spire's Magmaul weapon, the Battlehammer propels its shots in an arc and creates a wide blast radius. Weavel can transform into the Halfturret form. His top half pops off and can be controlled by the player, slashing enemies with the Battleblade on his wrist, while his lower half stays in one spot, automatically firing at foes with the Halfturret Slice.