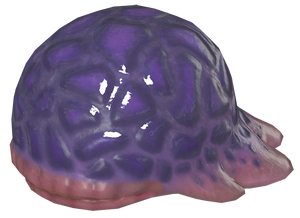 Pikmin Universe
The Water Dumple is a type of aquatic creature that is commonly found within freshwater marshes and pools on PNF-404. Despite its aquatic appearance, it's actually another type of Grub-Dog, closely related to the Bulborbs.

Water Dumples are about the same size as Dwarf Bulborbs, but hold numerous differences from its terrestrial cousins. It has no eyes, sensing the world around it through sensing vibrations. As the name implies, it once used a pair of whiskers to do the same job, but later Water Dumples lost these in favor of touch sensitive skin on its stomach. Their legs devolved and were replaced with several tentacles trailing behind them, used to slide through the water and mud after prey.

Water Dumples are social animals, and often found in small groups communicating with one another. Although social, they don't work together to capture prey and instead swarm it blindly. They only do this though while in water, leaving them vulnerable to their stronger terrestrial Bulborb cousins if left on dry land.

They are capable of going on land, but only for a brief time before it would have to return to the water thanks to its thinner skin.

Retrieved from "https://aliens.fandom.com/wiki/Water_Dumple?oldid=148396"
Community content is available under CC-BY-SA unless otherwise noted.