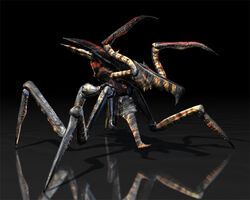 Starship Troopers
Warrior Bugs are bred for use as the main infantry caste of the Arachnid forces of Klendathu. They are hexapods, meaning that they are only six-legged; however, they only walk on four of these legs (the hindlegs and forelegs), with their other two limbs (sometimes referred to as "side mandibles") raised in the air in an attack posture. They possess powerful jaws, which they can use to literally rip a foe in half. Generally, they attack in huge swarms, and have been known to be supported by the Tanker Bugs.

The upper forearms, or "side mandibles" are utilized like organic swords, and are used for both offensive and defensive techniques. They are used as its primary weapon, as they reach out to well over a meter; 2 feet further than their forelegs and 3 feet further than their mandibles. It was originally believed that the Warriors could use these upper forearms for grasping objects in a manner similar to that of a praying mantis, but this has been disproven. Warriors in fact possess no dexterity with their upper forearms whatsoever, and they are merely built for stabbing and slashing implements.

Their secondary weapons are their pincer-like mandibles, which are capable of crushing rock, metal, and severing limbs; the last of which is one of their chosen means of attacking foes.

They also seem to possess a form of natural, non-changeable camouflage, colored to match their local terrain; for example, desert-based warriors are tan with black and yellow stripes. This presumably operates on both an offensive and defensive level.

Warriors are quite fast and agile, using their hindlegs and forelegs (not to be confused with their upper forelegs) as their means of locomotion. Of these two sets of limbs, the hindlegs serve as the primary locomotion, as they are much longer than the forelegs, being 1/3 longer. They can climb and burrow with these legs if need be, but prefer to use the tunnels made by Burrower Bugs instead. Even if they lose a limb, they still fight at 86% efficiency.