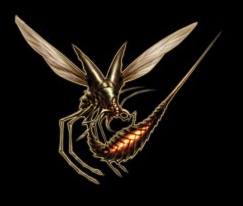 Metroid
The War Wasp is an extremely aggressive and territorial insect that comes in many different varieties.

The War Wasp is quite large in comparison to most insects, estimated to be between 1.5 and 2 feet in height. It has 4 long legs, two wings, and a long, thin abdomen that gets thicker near the bottom. The end is tipped by a razor-sharp barb, which is supposedly strong enough to damage steel.

The War Wasp is the normal subspecies. The War Wasp Queen produces a jelly that is so highly valued that it is harvested on the planet Aether, even though the death toll for doing so is astronomical.

The Barbed War Wasp is a much more aggressive and dangerous version of its other cousin. They travel in large swarms, attacking virtually everything that threatens them or their hive. They are capable of firing their stinger as a projectile, and can regrow them in mere seconds. Two sub-varieties are the Red Barbed War Wasp, which uses body heat to fire a heated spine, and the Blue Barbed War Wasp, which requires a very cool environment to fire cold spines.

Ram War Wasps prefer to circle their target in groups. Once they are all ready, they use a coordinated attack which is made possible by a shared hive mind. Their attack is a fierce ram attack using their entire body for a weapon.

Dark War Wasps are the result of an Ing parasite "possessing" a war wasp. It is able to fire a dark energy stinger. It is more durable than it's "light" breatheren.

Hives are the natural homes of War Wasps. Built from whatever materials are available, these nests will continue to release War Wasps in defense.

An artificial and especially tough version of a hive, these are home exclusively to Ram War Wasps. Aside from the creatures that live in it, it has no means of attacking or defending itself. So far, this has only been encountered on Tallon IV.

The wasp reproduces by parthenogenesis and is capable of laying over 200 eggs per season.

The sting of a war wasp is dangerous enough to inject a huge dose of poison into a creature.