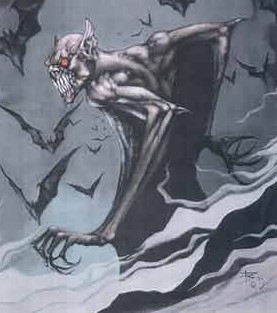 If the leeches bond with canine animals (such as wolves or foxes), they create Werewolves (vampiric wolves able take human-like forms to lure preys towards them).

Some bald Wamphyri Lords (like in the case of Vasagi, Drakesh, Luscula and Zack) looks like Count Orlok from the silent movie "Nosferatu: A Symphony of Horror".

Some humanoid Wamphyri can manifest beast-like traits such as: canine muzzle and chiropteran ears. This may be due to their distant ancestry from an infected animal.

The Wamphyri Werewolves (humans infected by vampric wolves) are capable to shift into wolf-like creatures.

Wamphyri Flyers
Add a photo to this gallery
Retrieved from "https://aliens.fandom.com/wiki/Wamphyri?oldid=184581"
Community content is available under CC-BY-SA unless otherwise noted.