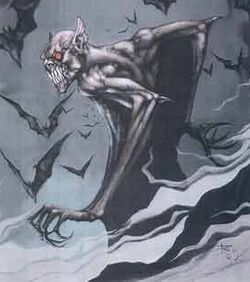 Some bald elder Wamphyri Lords (like in the case of Vasagi, Drakesh, Luscula and Zack) looks like Count Orlok from the silent movie "Nosferatu: A Symphony of Horror".

If the leeches bond with canine animals (such as wolves or foxes), they create first type Werewolves (vampiric wolves able take human-like forms to lure preys towards them).

The second-type Werewolves (humans infected by vampric wolves) are capable to shift into wolf-like creatures.

Some non-werewolf Wamphyri can manifest beast-like traits such as: canine muzzle and chiropteran ears. This may be due to their distant ancestry from an infected animal.