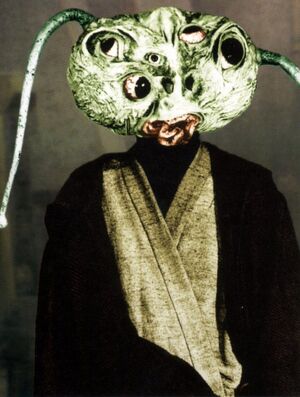 Evolved on a forest world

Star Wars
Vuvrians are a humanoid species with large, twelve-eyed insectoid heads, native to the Inner Rim planet known as Vuvria. Averaging at about two meters tall, Vuvrians are cordial, diplomatic and inquisitive in nature. As a result of living on an almost idyllic homeworld — Vuvria was windless, predator-less world of mosses and trees — the species developed extremely sensitive skin, which declined in sensitivity as a Vuvrian aged.

Natural problem solvers, Vuvrians Force sensitives are not uncommon, however they make poor soldiers due to their extremely low pain threshold. Although they are important members of Galactic society, Vuvrians never made any attempts to colonize other worlds — preferring to stay on their peaceful home planet.

Vuvrians are lightly built, duodecanocular bipedal insectoid sapients. They have an oblong-shaped head on top of their long, thin necks. They have 12 eyes varying in size and color, and two long, thin antennae on their heads. They stand about 2 meters tall, with females displaying slightly thinner builds and more oblong-shaped heads. Many other species find the Vuvrians' appearance almost comical.

As a species, the Vuvrians evolved a highly fine sense of touch; a survival mechanism developed in response to the few predators that called Vuvria home. A Vuvrian's skin is so sensitive that an individual can, for example, feel the minute shifts in air temperature when another being walks into a room. Such heightened sense is often mistaken by other species for latent telepathic ability or even Force-sensitivity. Indeed, a number of Vuvrians excel as Jedi, with their innate abilities augmented by the power of the Force. As a Vuvrian ages, however, their skin becomes increasingly wrinkled and less sensitive — a process that is accelerated in harsh offworld environments such as those found on Tatooine or Hoth. Vuvrians do not deal well with pain.

Considered younglings until they reach eleven standard years old, Vuvrians reach adulthood at around eighteen. Society considers Vuvrians over the age of sixty to be elderly, and anyone over the age of eighty is thought to be venerable, commanding respect due to their old age.

Vuvrians as a species are intelligent and inquisitive in nature. A warm, sincere, friendly people, Vuvrians are very diplomatic, and are natural problem solvers. Although some species find the Vuvrians' physical appearance somewhat disturbing, it is difficult to resist their outgoing, charismatic personality, and their skill in oration and logical argument often means others will find it all but impossible not to see a Vuvrian's point of view. The species' genuine interest in learning about other cultures, and to help others solve problems, ingratiated many Vuvrians into the wider galaxy, and made it easy for a Vuvrian to notice the quirks in other species' cultures.

The Vuvrians never developed a great interest in offworld colonization, despite being long-standing members of galactic society. Rather than fund colonies and enclaves outside their home system, Vuvrians are content to tour and observe the greater galaxy, although many find that other worlds, and even space stations, pale in comparison to the paradise of Vuvria. Curiously, it is noted that those Vuvrians who settle offworld tend to gravitate towards harsher climates, and xenobiologists are unable to explain why this was so.

Vuvrians were more than happy to join the Galactic Republic. Many of the species' Force-sensitives joined the Jedi Order, including the Jedi Knight Nystammall, who was ultimately killed by General Grievous during the Clone Wars.

Following the Clone Wars, many Vuvrians were employed by the Galactic Empire to negotiate trade contracts and rare disputes where even the military might of the Imperial regime was not practical or productive. Despite this, many Vuvrians also aided the Alliance to Restore the Republic during the Galactic Civil War, where they proved to be adept spies.

Other Vuvrians were content to remain neutral during the conflict.

Vuvrians, as natural problem solvers, can often be found in diplomatic or business-related fields, and many of the species became known as some of the greatest sales-beings, negotiators and first-contact specialists in the galaxy. Vuvrians scouts and spies are not uncommon, however they make poor soldiers, due to their extreme intolerance to physical pain. Many Vuvrians are also employed as law-enforcers, and the fact that their twelve eyes are spread on all sides of their head, meaning Vuvrians can see in all directions at once, is a huge advantage for those in that line of work.

Wioslea was a female Vuvrian speeder merchant who resided on Mos Eisley on the planet Tatooine during the height of the Galactic Civil War. She bought Luke Skywalker's X-34 landspeeder for Spaceport Speeders, a local Mos Eisley company that bought and sold landspeeders and other vehicles. Wioslea was also a gambler. Due to outstanding gambling debts, at the time of Jabba Desilijic Tiure's death, she owed him about 1,000 Imperial Credits. Wioslea was also able to speak many languages, including Bocce and the Jawaese and Talz languages.

Nystammall was a male Vuvrian, who was a member of the Jedi Order during the Clone Wars, with the position of Jedi Knight. He was stationed on the Outer Rim world of Tovarskl with his Master, a quadribrachial Eirrauc known as Puroth, during the Clone Wars. It was while stationed there that the two Jedi were killed by General Grievous. The cyborg then took their blue lightsabers as trophies.

Retrieved from "https://aliens.fandom.com/wiki/Vuvrian?oldid=187254"
Community content is available under CC-BY-SA unless otherwise noted.