The Vuushlop is a flying predator which lives in the Tundra. 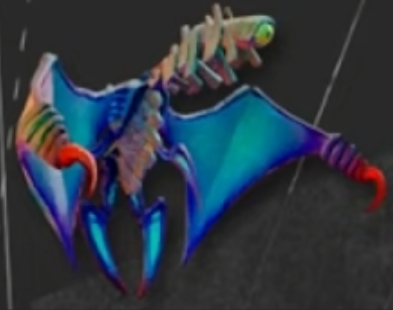 The Vuushlop is a flying omnivore distinguished by the sticky pads along the creature’s head and neck. The Vuushlop can swoop down and use these pads to capture food, be it fruit, small animals, or the occasional Trebhum. The food will then be transported to a treetop, where it will be devoured. Should the food have other ideas, the Vuushlop also has two massive claws on the underside of its body which can deliver a bone-breaking kick.

The Vuushlop is very aggressive and has a large sight range. When it detects you, it will swoop at you very quickly attempting to snatch you in its sticky pads. The attack is dodgeable but the Vuushlop will come back for another strike if you are still in its sight.

If it catches you, it will carry you to its home, a dendrospiral, a large ice structure. On top of which it will slam you down on the top of it and fly away. On the top of this dendrospiral you can find floating crystals which can be cracked into a dendrospiral seed, which when eaten gives you the extendable eyes mutation, allowing your eyes to detach from your body and rise to the sky, giving you an areal view above your trebhum.

It is very easy to leave the dendrospiral after being caught by one, but be careful not to meet the Vuushlop who caught you again, as they will kill you with their kick.