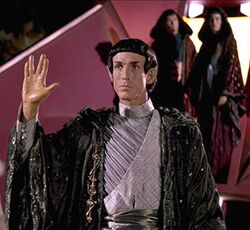 Evolved on a desert environment

Omnivorous, but usually restrict themselves to a vegetarian diet

Gene Roddenberry
Vulcans are a sapient humanoid race native to planet Vulcan. They are notable for their commitment to logic and reasoning, and for being one of the founding members of the United Federation of Planets.

Externally, Vulcans are extraordinarily similar to Humans, the main differences being their arched eyebrows and pointed ears. Physically omnivorous, they prefer to restrict themselves to a vegetarian diet, the exact reason for this being unclear. It is possible that this reflects a cultural tradition going back to thousands of years.

The Vulcan heart is located in the region where a Humans liver would be. They have green-colored blood, containing copper, similar to that of Earth's arthropods. Their blood temperature is colder, compared to Humans. Vulcans also have a much faster metabolism than Humans: their heart beats several hundred times per minute and they are physically faster and three times stronger than Humans. In spite of this fast metabolism, they are relatively long-lived, having an average lifespan of two-hundred Earth years. The Vulcan body is very resilient, and they are able to survive for many days without food, water or sleep.

Vulcans have many physical adaptations to the hot, desert environment of their homeworld: they have a set of inner eyelids which protects their eyes from brightness and sandstorms. They also have a very efficient respiratory system, in order to get enough oxygen from their planet's thin atmosphere.

Vulcans have an acute sense of hearing and their brains are very complex. They are a telepathic species, being able to read another being's mind by simply touching the being's head with their fingers. This technique is known as Vulcan mind meld. It is also possible, although probably not as efficient, to perform mind meld without having physical contact. Another ability they have is the "Vulcan nerve pinch", which is used to render another being unconscious by pinching them on the neck region. Vulcans are at least partially able to voluntarily control aspects of their physiology which would usually be involuntary. When injured, for example, they can concentrate all their strength into healing the injury faster.

Every seven years, adult Vulcans pass through a mating ritual called "pon farr", where they face dangerously intense emotional stress, and whereupon they must mate or die.

When faced with death, Vulcans are able to use mind meld to transfer their katra or living essence to another being or object, thus allowing for their spiritual essence to be preserved.

It's been speculated that Vulcans might be descended from the ancient Arretans, which colonized many worlds in the galaxy about 600,000 years ago. The mind-transferring ability of the Arretans is notably reminiscent of the Vulcan katra transference.

Once a violent and superstitious race, Vulcans have learned to suppress emotions and live almost solely by logic. The founder of their modern way of thinking was a Vulcan scholar named Surak. Those who didn't follow his philosophy remained belligerent and formed colonies on other planets, eventually spawning the Romulan race.

The Vulcan civilization has long reached a technologically-advanced, space-faring stage of existence. In 2063, Vulcans became the first extraterrestrial species to make official contact with Humans on Earth. They were among the founding species of the United Federation of Planets in 2161 with Humans, Tellarites, Andorians and are still one of the major members of the Federation. 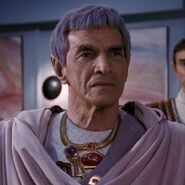 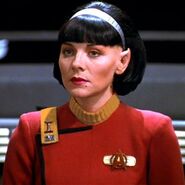