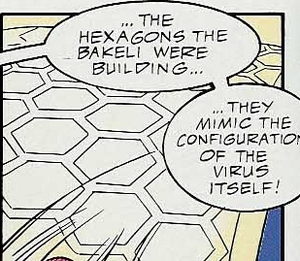 Alien Legion
The Vreel are a mysterious alien race from beyond the Tophan Galactic Union.

The Vreel are actually a hexagonal structure microorganism of a sort that has never been seen before. The Vreel infect other species, inducing homicidal madness with an urge to spread the infection. They invade the central nervous system, infects and alter the entire physiology of its victims. After enslaving the host species, it possesses a sum total of all Vreel in existence.

No one in the Galactic Union has ever seen the Vreel. They have been a subject of many rumors and myths in the Kalon frontier. According to an old myth, they are an invisible powerful enemy that even the stars themselves fear. The name is Vreel, is not the name of their species, but only a name given to them as nobody knows what to call them. Every planet the Vreel take over, inhabitants are driven mad and their world is laid to waste.

Retrieved from "https://aliens.fandom.com/wiki/Vreel?oldid=182085"
Community content is available under CC-BY-SA unless otherwise noted.