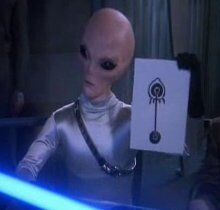 Babylon 5
The Vree are a spacefaring humanoid species and members of the League of Non-Aligned Worlds.

They are notable for their short stature, enlarged cranium and large black eyes; their appearance is somewhat reminiscent of the Streib, and both species are likely candidates to represent the so-called Greys, which were known to Humans anecdotally before official first contact with the Centauri. Vree have an entirely cartilaginous skeleton.

Vree travel in saucer-shaped vessels. Their society is known for its highly competitive capitalistic tendencies, and they are also known galaxy-wide as compulsive practical jokers. Their eating habits are considered horrific, at least by the Narns.

In the year 2258, the Babylon 5 station became stage for a curious judicial trial in which a Human by the name Flinn attempted to sue a Vree for personal damages, claiming that the Vree's great-grandfather had abducted Flinn's great-grandfather.

Retrieved from "https://aliens.fandom.com/wiki/Vree?oldid=187803"
Community content is available under CC-BY-SA unless otherwise noted.