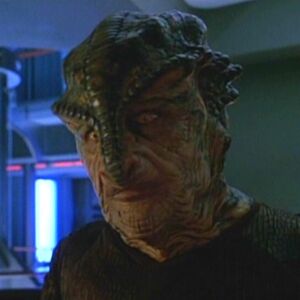 Star Trek
The Voth are a sapient humanoid species of reptiles which currently dwell in the Delta Quadrant in the Milky Way Galaxy, at almost a full galactic diameter away from their original homeworld of Earth.

They evolved from a species of ornithischian dinosaurs during the Cretaceous period, in a part of the world which has since been submerged, preventing Humans from uncovering their relics and fossils. When an asteroid hit the Earth, causing a collapse of the ecosystem, the Voth population left the planet and became a nomadic species, eventually discovering the transwarp technology which allowed them to travel to, and settle in, the distant Delta Quadrant.

Having lived there for tens of millions of years in their colossal city vessels, modern Voth have long forgotten about their origins and instead adopted a quasi-religious doctrine which state that they were the first sapient species to evolve in the quadrant and have a birthright claim to their region of space. The "Distant Origin Theory", as proposed by some scientists, is viewed as heretical, since the Voth place a great value at their idea of "birthright to the land", consider immigrant species as unworthy, and refuse to accept that their ancestors might have been refugees and/or nomads. Voth society is ruled by a powerful Ministry of Elders.

Having evolved more than 70 million years prior to man, the Voth are now extremely advanced biologically as well as technologically. Physically, they are poikilothermic upright bipeds who describe themselves and similar species as "saurians". Their cranial capacity is 22% higher than that of Humans, which doesn't necessarily imply superior intelligence, although they do tend to view homeotherms as an inferior category of life (resulting in their species having bad political relationships with most mammalian races). Unlike their distant ancestors, they have no tail, but possess scaly skin which can change color subtly according to emotional shifts, and three clawed-fingers on each hand. Their olfactory sense is much more developed than that of Humans.

Most notably of all, they have a modified structure on the forearms which shoots venomous darts for self-defense. When threatened, they can enter into a hibernate state for many hours or days. Despite millions of years of isolation, however, modern Voth still have 47 genetic markers identical to those of Humans and other earthling lifeforms. As for technology, they are one of the very few species which masters transwarp equipment, as well as possessing phase cloak devices which allow individuals to operate undetected among others (similar to what happened by accident with Geordi La Forge and Ensign Ro in the Next Generation episode "The Next Phase").

Voth Mecha of the 25th century (Star Trek Online)
Add a photo to this gallery
Retrieved from "https://aliens.fandom.com/wiki/Voth?oldid=177463"
Community content is available under CC-BY-SA unless otherwise noted.