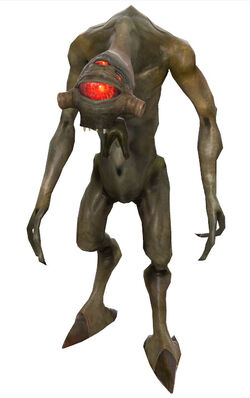 Same as a human

Their native homeworld is not Xen however they were forced to evacuate to Xen following the invasion of their homeworld, led by the Combine. In Xen, they were enslaved and then forced to lead an invasion of Earth following the Black Mesa Incident, under the direction of the Nihilanth. Following the death of the latter, they have as a species chosen to ally themselves with the human-led Resistance in its bid to overthrow the Combine rule of Earth. They were originally hostile towards humans, but only because they were forced into it by the Nihilanth, and have since made peace with them as of being liberated by Gordon Freeman. They don't even hold any grudges towards them for the loss of some of their fellow Vortigaunts.

In appearance, a Vortigaunt is roughly humanoid with two legs and two arms, but has an additional arm protruding from its chest. This extra limb is a feature also found in the other bipedal, sapient species from Xen, including the Alien Grunt and Nihilanth. This similarity, along with other shared features such as red eyes and back-jointed legs, is strongly suggestive of a common ancestry with other intelligent Xen lifeforms. Apparently, this third arm is used for feeding, as both Vortigaunts and Alien Grunts are often seen bending over slain victims while feeding off of it. Vortigaunts have a mottled green-brown skin, sharp teeth, and clawed hands. Vortigaunts have a slightly hunched posture, and their faces are dominated by a large, single red eye, surrounded by five smaller eyes.

Vortigaunts are very intelligent and social creatures, and often display these traits. Vortigaunts are often seen in pairs or groups, and are capable of developing intelligent strategies. When faced with a superior enemy, Vortigaunts will often run away from the scene, and if possible, will group together with others to form a stronger force. Vortigaunts possess their own method of vocal communication, which they can be heard using and referring to as "flux shifting". This method of communication involves both speakers vocalizing at the same time, which separates it from all known human languages. According to the Vortigaunts, flux shifting cannot be understood by "those whose Vortal inputs are impaired", which may suggest that other inaudible components are involved, perhaps explaining why it is incomprehensible to humans. Another explanation is that they are subtly suggesting - via the use of the word 'impaired' - that the senses of humans are not quite as 'advanced' as theirs.

They are capable of learning human languages. The Vortigaunts' use of English is slightly strange, however, as they use archaic, even Shakespearean, words and grammatical structures which are largely obsolete amongst present-day human speakers. It is not known whether this is a lack of understanding or a deliberate choice on their part.

We've had brief glimpses into their culture from some speeches they've given. Vortigaunts were an enslaved species to the Nihilanth, used as factory workers and drone soldiers. Based on comments made by the "All-Knowing Vortigaunt", it seems that the species has endured slavery for many generations, and enforced servitude appears to have formed the bedrock of Vortigaunt history and culture up to Black Mesa creating the dimensional rift into Xen. The free Vortigaunts make occasional references to their species' culture. Vortigaunts have many traditions, including an apparent oral tradition of passing down poetry and songs from generation to generation. They believe in a binding life-force which they call the "Vortessence" (see below), which could be a religion or a popular belief. Due to their use of this force, which remains untapped by the human species, the Vortigaunt species is capable of a form of telepathy, at least amongst their own kind. One particular comment made by a Vortigaunt - "We have lost all dear to us" - suggests that the Vortigaunts have lost their home world and civilization, yet are determined to start again alongside the human race on Earth. There also seems to be a possibility, based on phrases uttered by the "All-Knowing Vortigaunt" that Vortigaunts have a collective consciousness through time and space, and that each moment (Gordon killing the Nihilanth, Gordon's arrival at Black Mesa East, etc.) through time appears to them as one.

It is also worth mentioning that there seems to be a sort of practical afterlife available for Vortigaunts. This is suggested by one of the statements of the All-Knowing Vortigaunt: "What seems to you a sacrifice is merely, to us, an oscillation. We do not fear the interval of darkness." The statement implies that, whenever a vortigaunt dies, it passes into "the interval of darkness", from which it may be able to emerge anew, possibly in a new body or in an astral form similar to the 'purple vortigaunts' (Though whenever a Vortigaunt is engaging in the ritual of the use of Antlion Larval Extract it turns a dark purple).

While they have their own language, Vortigese, Vortigaunts are also able to speak in English (and remark humorously on the etiquette of which language to use). They also tend to refer to some characters by adding "the" before their name, such as "The Freeman" or "The Alyx Vance". Vortigaunts can communicate with one another telepathically through a life-force they call the Vortessence.

They believe Vortessence is the fabric of the universe, made of vortal cords, of which everything is woven (and therefore everything is connected). The Vortigaunts are able to read and control this force for their electrical powers, nearly hive-mind telepathy and, likely, their ability to take power from objects. They are also able to use the Vortessence to heal wounds to an extent and keep the dying from passing on. They can use their powers coupled with "the extract" of Antlion larvae to bring the nearly dead back to life.

The Vortessence is similar to the current human theory of String Theory in that atoms, the basis of matter is made up of "strings" which exist across dimensions because of their extremely small size.

Vortigaunts used to be aggressive towards humans in both Black Mesa and Xen. While they usually attack aggressively, they often become timid when injured, preferring to run away rather than risk further combat and possible death. They have two modes of attack: an energy attack in which they fire fairly powerful green lightning-like energy beams that require a vulnerable period of "charging-up" before being unleashed, and when close to opponents, they attack with their claws. In their first sighting, Vortigaunts wear green collars and wrist bands. Later events reveal these to be a means by which they are controlled by a remote master (the Nihilanth). Vortigaunts often act as support for the tougher Alien Grunts, making them more likely to be able to use their attack, as the player is usually concentrating on killing the tougher Grunts.

In later encounters, their electrical attack is far more devastating, tending to kill whatever it hits immediately, and quite often knocks back its target at considerable distance. Only objects with significant mass can resist being knocked back, such as the Strider (which appears to be fully immune to the beam) and Antlion Guards. It is also suggested that Vortigaunts can siphon an opponent's lifeforce with their energy beam attack, as they are heard saying phrases like "Give over your essence!" or "Empower us!".

The beam attack was discovered when a group of Vortigaunts use it to defend an underground outpost from a massive Antlion attack. It is shown to be powerful enough to kill Antlions and Zombies, and causes a shock wave strong enough to knock over other nearby foes. Freeman's Vortigaunt companion uses this ability to aid him in his attempt to raid an Antlion nest.