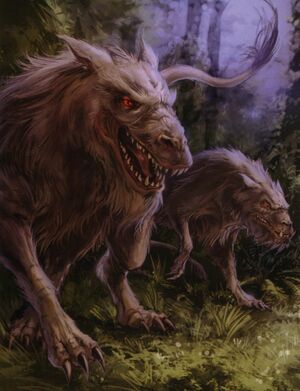 The vornskr was a canine beast that could hunt using the Force. At least four different physical appearances of vornskr exist; given their significant physical form, they likely represent a couple of genuses, or are perhaps instead a form of immaturity and sexual dimorphism.

The vornskr, native to the planet Myrkr, were a wild, vicious canine species that had the unusual ability to sense the Force. This ability evolved to help them hunt ysalamiri, but a side effect caused them to think that Force-sensitives were their favorite prey, including Jedi in their appetite.

To counteract this hunting method, the ysalamiri developed the ability to project a "Force bubble," inside which no Force abilities could be used.

Vornskrs were primarily nocturnal hunters, and used their whip-like, mildly venomous tails to stun prey before finishing it off with their teeth. They were normally sedate during the day, but hunger or other factors would drive them to hunt during daylight hours.

Before Jedi Master Mace Windu refined it into Vaapad, the Form VII style of lightsaber combat was referred to as the Way of the Vornskr.

Tyber Zann was known to use such creatures within the Zann Consortium. After taking the younger vornskrs away, the pups were trained as effective hunters for enemy troops that managed to escape the confines of their imprisonment.

The smuggler Talon Karrde kept two vornskrs, Sturm and Drang, as pets and guard animals, and considered offering them for sale as guard animals. He discovered that cutting off their whip-like tails was similar to castration, since it removed most of their hunting aggression, a fact he detailed in an article published in the Galactic Zoology Monthly.

Vornskrs were also used as guards in the Dark Force Temple on Dromund Kaas.

Retrieved from "https://aliens.fandom.com/wiki/Vornskr?oldid=181037"
Community content is available under CC-BY-SA unless otherwise noted.