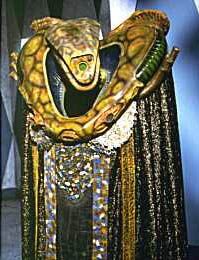 The Vorlons are one of the oldest sapient species of the Milky Way Galaxy and one of the two ancient races which decided to stay and influence the development of younger species; the other being the Shadows. When in the presence of other races, Vorlons often wear encounter suits. As such, few people have ever seen what a Vorlon really looks like. Since Vorlons are capable of surviving in an oxygen atmosphere, the suits are used entirely to hide their appearance.

Vorlon encounter suits are equipped with a language translation device that transforms their unique language into a more common tongue. The Vorlon speech sounds like a sequence of overlapping musical tones, chirps and chimes. The physiological mechanism they have to make this sound is unknown.

A Vorlon's true appearance is that of a luminous, partly translucent, radially symmetrical multiped. Though they may appear insubstantial, they are in fact physical life-forms.

Due to their tampering with the development of many of the galaxy's younger species, Vorlons have appeared in the guise of divine beings, although their appearance can vary greatly depending on the species and individual's own history and mythology. This mass yet individualized hallucination is accomplished by way of actively projecting a telepathic image, which when used on a great number of people requires a significant effort for a Vorlon and can be a great strain. To most beings, this image takes the form of a being of light from their own cultural mythology. Some examples include the "Angels" and "Shalako spirits" of Earth cultures; Dro'shalla from the Drazi Kri Maru faith; G'Lan for Narns and Valeria from Minbari mythology.

The interpersonal sociology of the Vorlons seems to be dependent on their telepathy. All Vorlons appear to be connected telepathically, though to what extent their thoughts are shared or hidden remains a mystery. Vorlons who have their own ships also have a telepathic connection with those vessels. Very soon after the death of Kosh Naranek, the Vorlon High Command was aware of the tragedy. It is unknown whether they were made aware because of some telepathic bond or whether they were contacted by Kosh's ship who would have known immediately of its master's demise. The true extent of a Vorlon's telepathic abilities are unknown, however it has been known to have a strong influence when a person's mind is in an altered state, such as sleeping, dreaming, exhausted or in a heightened state of awareness. It is for this reason that their presence is often associated with visions and dream imagery.

Vorlons are known to have lived incredibly long lives, if not effectively immortal and have demonstrated telekinetic abilities, including self-propelled flight in a 1 standard gravity environment

Retrieved from "https://aliens.fandom.com/wiki/Vorlon?oldid=173979"
Community content is available under CC-BY-SA unless otherwise noted.