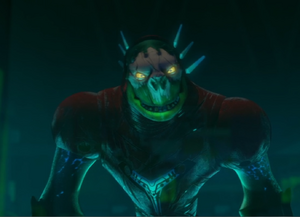 Tales of Arcadia
Voltarians are an alien species from the ruined planet Voltar.

Voltarians are reptilian creatures with green skin, yellow eyes and blue ears. Electro-thermal lifeforms that have the ability to channel electricity and even convert them bodies to lightning allowing them to travel through electrical circuitry. They can be contained via rubber and silicon.

Retrieved from "https://aliens.fandom.com/wiki/Voltarian?oldid=199646"
Community content is available under CC-BY-SA unless otherwise noted.