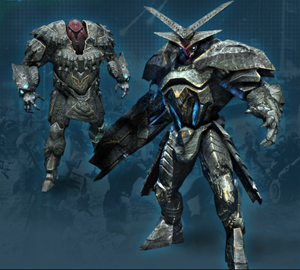 Defiance Universe
The Volge are a species of world-conquering aliens, sometimes considered as one of the Votan races.

The Volge stand over 8 feet tall and their bodies secret an organic armor which is very difficult to puncture. Their bodies also organically power their bionetic Cold-fire weapons. Volge do not process oxygen very well and require their armor to provide them with some protection, if their bodies are exposed to oxygen it severely burns them. Volge are believed to reproduce with clone-like offspring through their DNA.

The Volge evolved on an unknown planet somewhere in the galaxy, but eventually traveled to the Votanis System where they took part in the War of Six, fighting with the other Votan races and pushing the Omec back to their planet. They later claimed the planet and almost wiped out the Omec in the process. When the Votanis Collective was boarding the Arks they purposely did not invite the Volge, however a number of them were brought aboard and kept in their own stasis pods; several Warmasters were also put in stasis aboard the ships.

In 2025 they started to be seen on Earth and fought against both the Votanis Collective and the Earth Military Coalition. When the Pale Wars Armistice was signed, the Volge retreated into their underground caverns in the Storm Divide, occasionally coming out to collect ark debris. In 2046 Nicolette Riordon and Solomon Birch hired a Volge army to attack Defiance in order to drive everyone out so they could search for the Kaziri buried under the town, but the army was destroyed when a Terrasphere was detonated in their path. Several months later large groups of Volge began entering the Bay Area.

The Volge began being attracted to Votan Ark Reactors which fell out of the Arkbelt in order to siphon energy from them; dozens of Volge came down from orbit to collect it. When Ark Hunters began manipulating the engines of Ark Modules to bring them down, several Warmasters were encountered and some escaped. The Volge continued to come to the Bay Area to collect ark debris and tech. General Rahm Tak hired several Volge to serve in his death squad but they were killed when the squad was wiped out near Defiance.

The Volge are a very warlike race and equally feared by Humans and other Votans and have no allies but will take on tasks for other races if they are paid. They wear organic armor, similar to an alloy native to the planet Omec, that have in-built weaponry. They live in massive underground colonies. Their only known weakness is their fearlessness - they are willing to march into combat with little or no support.

The Volge use bionetically-powered technology and Cold-fire weapons. They have powerful handheld and artillery weapons. Their armor allows them to survive in space and when entering a planets atmosphere.

Retrieved from "https://aliens.fandom.com/wiki/Volge?oldid=182014"
Community content is available under CC-BY-SA unless otherwise noted.