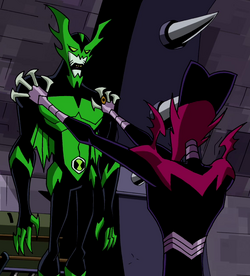 Ben 10
The Vladats, also known as Vladites, are a functionally extinct race of vampire-like aliens from the planet Anur Vladias in the Anur System.

The Vladats' main source of food is Transylians, though they can feed off energy from other living beings such as Celestialsapiens.[1] Vladats also eat insects.

Vladats possess powers that are similar to stereotypical vampires of legend, such as feeding off the life force of other beings through their fangs. If a Vladat were to completely drain another being of their life force, the victim would look similar to those of Darkstar.[1]

Vladats can fly by either using the bat-like wings under their arms or transforming into miniature bat-like forms.[1]

Vladats can hypnotize other beings by making direct eye contact with them, and are immune to external forms of hypnosis.

In order to control multiple beings at once, they create bat-like creatures called Corrupturas and affix them to their victims' foreheads. Corrupturas have been effective on other races from the Anur System, such as Transylians, Thep Khufans, Loboans, and Ectonurites.

To control Earth vampires like Dracula, Vladats would need their strongest Corruptras.[1] To control possessed inanimate objects, the possessor's consciousness would have to be continued within the object they are inhabiting.[2]

Vladats possess enhanced strength, as they can easily carry other beings while flying and hold their own against a mob of Corruptura victims before eventually being overrun.

Vladats can survive in the vacuum of space, likely due to their undead-like nature.[1]

Similar to Ectonurites, Valdats can probably transform into a smoke-like form.[1]

Like the other races in the Anur System, Vladats can see in the dark.[1]

Vladats can generate a powerful sonic explosion that can launch enemies away as a means of self-defense.

Vladats can see the internal structure (e.g. nerves) and energy of their victims using their infrared vision.

A Vladat's immunity to external hypnosis has a drawback, as they cannot mind-control other Vladats. They are also unable to control cybernetically enhanced beings such as Exo-Skull because of their armor.

Vladats would be unable to hypnotize Florauna due to their own hypnosis immunity. It is possible that they are also unable to control Florauna using Corrupturas depending on their willpower.[1]

A Vladat's Corrupturas cannot attach to a species with slippery skin, such as Ickthyperambuloids[1] and Hobble's Species. Similarly, they are unable to use their Corrupturas on Ectonurites as long as the latter remain intangible.

Vladats are unable to control an entire set of Splixon clones using their Corrupturas because each clone is an independent being. Furthermore, the Corrupturas will not be copied across said clones.[1]

Unlike with hypnotism, beings controlled by Corrupturas are conscious and aware of their surroundings.

Vladats can be harmed from exposure to sunlight and intense heat, such as that generated by Pyronites, Prypiatosian-Bs,[1] and Atomix's Species. However, unlike Ectonurites, they can withstand greater amounts of light before being burned to ashes.

When feeding off Celestialsapiens, Vladats will not receive cosmic power boosts because they would feel like they just slammed an energy drink.[1]

Vladats are unable to drain life energy from certain beings. For example, they cannot drain Ectonurites because they are not alive in the conventional sense. They are also unable to drain zombies they have no life force left.[1]

Vladats can experience fear in the presence of Toepick's Species.[1]

Judging from their past history with the Transylians, Viktor's hatred of them, and Lord Transyl's attitude toward Zs'Skar and others, Vladats appear to be arrogant, cruel, and bloodthirsty. They consider other beings (especially Ectonurites) to be inferior to them, and only useful as either slaves or food.

The Vladats originated from Anur Vladias. When it became uninhabitable, they abandoned their home planet and moved to the planet Anur Transyl, the home planet of the Transylians. According to Dr. Viktor, the Vladats used his people as slaves like nothing more than beast of burden and, ultimately, as food. This is most likely due to their ability to create Corrupturas, which they used to control others.

At some point before Azmuth started acquiring DNA samples for the Omnitrix, the other sapient races of the Anur System began rising up against the Vladats.[1] The despots were eventually destroyed by the Transylians using captured Pyronite energy.[3] Therefore, their DNA was not originally in any Omnitrix DNA database.

Zs'Skayr revived Lord Transyl using the Alpha Rune and attempted to use his DNA as a template to revive the Vladat species only to be stopped by Ben Tennyson and a vengeful Viktor.

Technically speaking, the Omnitrix transformation Whampire and his genetic donor Lord Transyl are currently the only living Vladats left in the universe.