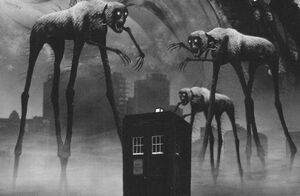 The Vists, a.k.a. Time Walkers, are a sapient species which dwells in a realm outside normal space, and are able to move through time with the same ease as they move through the spatial dimensions (up and down, forwards and backwards, etc.). This does not mean that they can go anywhere in time and are aware of all events - time has a geography just like space, so some areas are easier to walk to than others - but it does mean that they have the natural ability of time travel, and have access to other temporal realms such as shadow worlds and the Time Vortex.

They're described as strange quadrupeds, about the size of a greyhound, but with much longer legs which give them a somewhat surrealist appearance. They have monkey-like faces with two pupils on each eye, and they make a strange clicking sound as they move about. They can achieve great speed, but aren't very good at maneuvering. They seem to feed on the life force of other species, and are capable of detecting someone or something which has traveled through the Time Vortex by the smell of time energy.

As they could move through time as naturally as tridimensional species typically move through space, the Vists attempted to fence off a section of time from 2011 to 2019 and established that as their territory. They built a wall in the Time Vortex, separating that section, and claimed to have the right to feed on the life energy of any creature which "trespassed".

The Doctor's TARDIS collapsed with the wall while flying through the Vortex and ended up washing on a time-displaced "shadow" of 2011 Earth, where the Doctor and his companions Ben, Polly and Jamie were captured by the Vists. When he learned of their plan, the Doctor explained to them that other lifeforms were "time-locked", i.e., not able to move through time freely but only drift in a single direction, forwards. Therefore they couldn't avoid getting into the Vists' so-called territory. The Vists, however, were aware of this, and took advantage of the situation. They recorded a telepathic message in the fabric of spacetime, which would be heard by every lifeform in the universe which entered the Vists' territory, informing them that it's a restricted area and ordering them to either bypass it (which they couldn't) of pay a fee consisting of part of their life energy.

The Doctor tells the Vists that his people won't let them do this, and lies to them, claiming that his people were the first to evolve and therefore can claim ownership of all time. The Vists scorn the Doctor, informing him that, if that's how the law of time works, all they have to do is move backwards to a time before the Doctor's people evolved and then all will belong to the Vists. In doing this they fall into the Doctor's trap, as by attempting to go so far back in time they end up getting locked outside of time and space before the universe's creation, with no way to get back.

At some point in 2011, the recorded message is played and everyone in the universe hears it, but as Polly Wright explains to the authorities, there is nothing to worry about. No charges will be taken, as the Vists no longer exist.

Retrieved from "https://aliens.fandom.com/wiki/Vist?oldid=164828"
Community content is available under CC-BY-SA unless otherwise noted.