Alien Species
Register
Don't have an account?
Sign In
Advertisement
in: Articles that Need to be Rewritten, V (2009) Universe, Sapient Species,
and 10 more 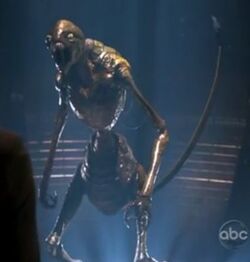 V (2009)
The Visitors - usually referred as Vs - are an extraterrestrial race of humanoids outwardly appearing to be much like Earth's homo sapiens, revealed to be reptilians covering their bodies in cloned human flesh.

When the Visitors first arrive on Earth, several reporters tried to ask Anna why they look so similar to Humans (for that matter, attractive humans), given that human scientists have calculated that the probability of alien life evolving to be exactly like humans is extremely low. Anna brushes this off by saying that her scientists could explain. Apparently, the cover-story that the Visitors propagate is that through convergent evolution, intelligent life just happens to evolve towards the human form.

Exactly what the Visitors would look like if their human disguise be removed, is unknown. So far there have only been two brief appearances of the reptilian Visitor form, both at the warehouse massacre during the Pilot. Ryan has the skin of his left forearm cut open, revealing scaly flesh. Far more briefly, when Erica hits Dale with enough strength to briefly stun him, and tears off the upper left part of his suit, revealing not only reptilian scales but a slitted eye as well. Visitors also have a row of sharp retractable teeth.

The Vs seem to have specialized roles pointing to a possible caste system. They are highly destructive when sent to kill something and can sense heartbeats. This all fits into the idea that they are bred for combat. Trackers are similar to soldiers who have heightened senses, and camouflage, and apparently can track people.

gh to humans that cross-breeding to create hybrids is possible. This would confirm that they are carbon-based, have left-handed protein and right-handed DNA, and probably have the same chromosome number. They have a large amount of sulphate naturally occurring in their body, a human women would need this sulphate to make it through a hybrid pregnancy.

The exact dietary needs of the Visitors have yet to be revealed, though they can apparently survive on human-food if they need to.

A pregnant female visitor (or a human female pregnant with a hybrid) experiences a massive increase in appetite - upon impregnating herself to spawn a larger army, Anna immediately devoured her mate. The eggs of the Visitors don't have an eggshell but float in a pool of liquid, it seems that laying thousands of eggs is a norm for the queen. The eggs mature in a matter of weeks and become extremly engorged.

In reality, the Visitors are a race of reptilian humanoids. On the universal scale, they're still fairly close to humans - in the sense that they're humanoid vertebrates as opposed to insect-men, and have mostly the same life support requirements (breathing oxygen, similar gravity, comparable tolerances to heat/cold).

However, the Visitors are still fa

r from the attractive humans they present themselves as. The Visitors have actually been sending intelligence gathering missions to Earth for decades, gathering genetic samples to eventually make cloned human skin-suits which they wear as a disguise. These suits are apparently connected to their central nervous system, allowing for complete control and sensation in this outer layer. As opposed to simply a costume, this disguise is living flesh, but not the actual organism. They are capable of healing on their own, though Visitor technology can be used to enhance the rate at which it does. They apparently have openings under the fingernails for claws to come out, but it's unknown if this applies to everyone or just females.

The Visitors and humanity established diplomatic relations a few hours following Anna's broadcast from the Motherships with world leaders. Visitor Embassies were established across the globe, where the Visitors would be allowed on Earth and the Peace Ambassador Programs could be headquartered. After several weeks, countries began opening their borders to the Visitors. The first countries were Mexico and Japan, followed by the United States, who issued special Visitor visas to over 100 Visitors.

The Visitors have their own language, which consists of 41 characters and ten numerals. It is often used on computer screens, and in signs posted around their facilities. Facilities that are open to humanity often have bilingual signs. 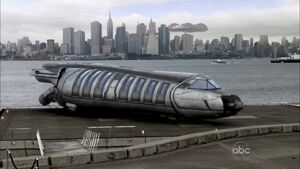 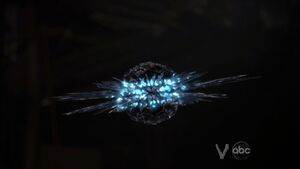 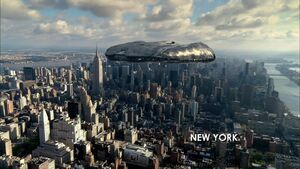 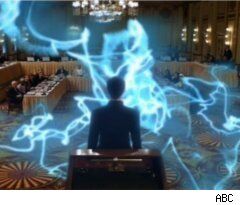 The Visitors are far more technologically advanced than humanity- even more so than in the original series. The Visitors have the ability to cure over 65 different Earth ailments, can manipulate gravity, have invented holograms, synthetic flesh, revolutionary power and propulsion systems, hallucinatory torture devices, and more (for a complete wwww

The Visitors use city-sized vessels to journey to Earth, known as a Mothership. There are over 29 Motherships around the world, in the cities of New York, Los Angeles, Mexico, Rio de Janeiro, London, Paris, Madrid, Moscow, Cairo, Tokyo, Shanghai, Sydney, Hong Kong and Florence, among others.

They use much smaller vessels for transport from the Mothership to Earth, the designation and specifications of which are unknown. The Visitors have also pioneered a device known as a Seeker, a gravity-resisting orb used to seek and destroy its victims.