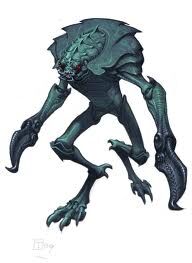 The Viperox are a technologically advanced bipedal insectoid species.

The Drones and males stand at roughly 7 or 8 feet tall, females or Queens stand at 20 or more. They are covered in a tough exoskeleton which is resistant to machine gun fire, however a more explosive projectile e.g. a tank round would blow them to pieces.

They are known to be carnivorous as the drones eat what they kill; the drones also have the ability to shoot explosive munitions from their claws on either arm.

The queens (similar to the Xenomorph Queens) are large, stationary and lay eggs.

They walk upright, however there are differences between different classes e.g. the Queens have a large abdomen and four legs, the lords have fingers instead of claws and four wings where as the drones just have claws and two wings. Despite these differences they all have a highly evolved sense of hearing, to the extent that they can hear through concrete walls from some distance away.

They are a war-like race of conquerors, although they never land an army - they land a queen and hatch one underground.

The Viperox were at war with the Nedenah also known as the Greys in the real world around the 1950-60s time period.

Their technology appears to be organic, for instance when the Viperox fled after the battle at Area 51, they used a ship which seemed to have been made out of the same material as their exoskeleton - it also resembled a giant beetle.

Retrieved from "https://aliens.fandom.com/wiki/Viperox?oldid=180221"
Community content is available under CC-BY-SA unless otherwise noted.