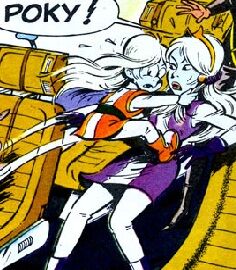 Roger Leloup
The Vineans are a race of blue-skinned humanoids native to the planet Vinea in the Triangulum Galaxy.

Vineans evolved many eras before humanity. Their homeworld was an Earth-like planet orbiting a binary star system. When the two suns (one blue, one orange) approached each other, they started emanating their coronas towards each other (a phenomenon similar to what could be considered a double nova). This made the surface of Vinea uninhabitable and forced its inhabitants to seek refuge underground. They later managed to construct a fleet of ships that would transport their population in suspended animation to new worlds.

One of those ships eventually settled on Earth specifically the southern part of Europe about 400,000 years ago. Since they had lived underground for the several generations, the colonists also built subterranean settlements and have lived that way ever since, although most of their population remains in stasis.

Retrieved from "https://aliens.fandom.com/wiki/Vinean?oldid=192938"
Community content is available under CC-BY-SA unless otherwise noted.