"I am Tarka Dal, ambassador of the great Vindaloovian empire!"
―-Lister posing as a Vindaloovian 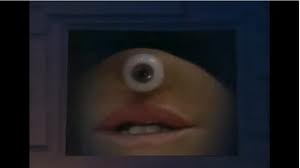 In the Series VI episode "Gunmen of the Apocalypse", Lister and the Cat pretend to be members of a GELF species called the Vindaloovians (Tarka Dal and Bhindi Bhaji) in an attempt to outwit a rogue Simulant. While they are considered mere fiction in the television series, Vindaloovians were expanded into being an actual GELF race in the "Red Dwarf the Roleplaying Game", appearing first as racial stats in "The Series Sourcebook", then receiving a more detailed description in the "Extra Bits Book". Vindaloovians are a small, but proud, martial culture who descended from experimental GELFs that were left to evolve over millions of years with the aid of 20th century war movies and a plentiful supply of curry and other spicy foods (the Vindaloovian colonies are described as having "garlic nan trees" and rivers of madras).

In appearance, Vindaloovians basically resemble humanoid eggs with a single prominent, blue eye placed in their tiny forehead above a horizontal mouth, their only other facial feature. They stand roughly 1 meter tall and are almost as broad, and have a wide variety of skin tones and hair colors (though they often shave their heads bald). They have only three digits (a thumb and two roughly equal length fingers) on either hand. Vindaloovian fashion leans heavily towards ostentatious military costumes; if it doesn't have epaulets, spurred jackboots and a half-cape, they don't want it.

Vindaloovians originally were highly xenophobic and aimed to destroy all other intelligent lifeforms (a policy referred to as Wipe Out Everyone!, or WOE!), but have in recent times relaxed this to merely hating humans with a passion (Wipe Humans Out All Over!, or WHOA!). Imperial edict is that humans are absolute scum, intergalactic vermin who cannot be trusted, and the official strategy, enforced by their aggressive society, is "brutally dismember first, ask questions later".

Vindaloovian society consists of three tiers. The topmost tier are the high officials, a member of which is referred to as a Tarka, from whose number is selected the Emperor or Empress of the Vindaloovian Empire. Below them are the skilled middle class, which includes the military officers, whose official title is Bindi. The final tier makes up the majority of the labor and soldiery, and carries the title of Grunti. Social mobility is possible through invidual deeds, but does not apply to the Vindaloovian's family unit (mainly because Vindaloovians reproduce through cloning vats and offspring are raised by the state).

Some Vindaloovians do rebel against the Imperial doctrine (which, among other things, requires a devout love of Wagner and Prokofiev) and are banished to wander deep space, either with fellow renegades or with motley bands of space drifters, such as other GELFs, mechanoids, evolved pets... and even humans and holograms

Retrieved from "https://aliens.fandom.com/wiki/Vindaloovian?oldid=188138"
Community content is available under CC-BY-SA unless otherwise noted.