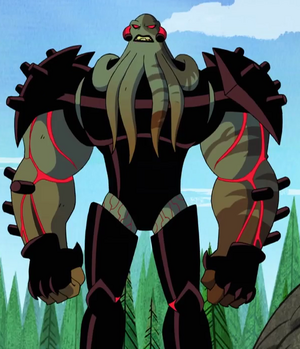 Vilgax resembles an ordinary Chimera Sui Generis, except for the fact that he has red eyes and wears battle armor to distinguish himself from the rest of his kind. In the past, he enhanced his own natural DNA with visible implant injectors, making himself more powerful than ever.

While serving Dagon as his "herald", Vilgax had the color scheme of a Lucubra.

In an alternate timeline, Vilgax became an entity called Alien V by mutating his DNA with that of a Celestialsapien.[1] As Alien V, he stood taller than a To'kustar and shared physical similarities with ordinary Celestialsapien. His body was mostly black with a red outline and had what seem to be red stars on the black portions of his body. He retained his red eyes yet lacked a visible mouth.

Vilgax possesses incredible strength at a level similar to Thanos,[2] being able to break free from Lepidopterran goo and stop an Arburian Pelarota in sphere form. He has also been shown lifting Cascans, Florauna, and Chronians with his bare hands.

Vilgax possesses enhanced durability, being able to withstand a Crystalsapien's lasers and make a Petrosapien shatter their arms and a Galvan injure themselves.

Vilgax has fireproof skin, being able to withstand a Methanosian's fire blasts. He can even survive an intense heatwave generated by a Pyronite without visible damage. Correlating with this, Vilgax appears to be immune to radiation, being able to safely pass through a planet's atmosphere.

Vilgax possesses enhanced reflexes and agility, being able to stop a Kineceleran at full speed and sneak up on an Oryctini.

Vilgax can shapeshift his arms into powerful tentacles and project powerful laser beams from his eyes which can burn Ectonurites and catch up with a Kineceleran.

Vilgax is quite intelligent, displaying high levels of expertise and knowledge of the Omnitrix, other species, and their home planets. He is also in command of a vast army of drones that he may have built himself.

Vilgax can transform into a large octopus-like creature while underwater; however, no other Chimeran has been seen doing this.

Vilgax can speak to and through his own DNA,[1] which explains how he was able to speak to Ben (in his Galvanic Mechamorph form Upgrade) while he was merged with Rojo.

Unlike other Chimerans, Vilgax can survive in the vacuum of space. In the past, he used to condition himself to do so without protective gear for brief moments.[4]

Vilgax used to be able to fly at superhuman speeds and breathe powerful cyclones. He gained these powers after defeating Ultimos, but eventually lost them after being defeated by Ben using Ascalon.

Vilgax possesses enhanced hearing, being able to hear sounds that are too faint for normal hearing to detect.

While he was in the service of Dagon, Vilgax could project and manipulate energy from his hands and eyes. He could also move between Dagon's dimension and back, similar to the Esoterica.

While wearing Malware's remains as battle armor, Vilgax gained the abilities of Galvanic Mechamorphs and had access to every piece of technology Malware modified his biology with. His durability was also increased to be able to withstand the nuclear energy generated by Atomix's Species.

As Alien V, Vilgax's powers were amplified to cosmic levels, allowing him to withstand several combined attacks from a mutant hybrid Petrosapien and an Omni-Naut Vaxasaurian. He could also increase his size.

Vilgax formerly owned several weapons, such as the Ruby Ray of Rouleau, the Shield of Seagel, and a ray gun. The only weapon he currently carries is his personal sword.

There a limited extent as to how much damage Vilgax can take. His size can makes it difficult to fit into small entrances.

Despite his skills on the battlefield, Vilgax can be defeated by the element of surprise.

Vilgax can be captured in a cage created by a Fulmini using their Omni-Enhanced energy. He can also be easily overpowered by the telekinesis of a Fulmini as powerful as the High Override.

Vilgax can experience fear in the presence of Ma Vreedle, as he tried to battle Ben only to retreat once she showed up. He is also afraid of Toepick's Species.[2]

Vilgax may have problems changing from a giant octopus into his conventional humanoid form if severely weakened. He needs to be in water-based environments while in this form.[5]

Despite being cosmically-enhanced in his Alien V form, Vilgax had a limit to his stamina. He was also vulnerable to both the cosmic rays of a To'kustar and his own optic lasers.

Because he was not allowed to reach full power, Alien V was weaker than he potentially could be.[1]

Vilgax is ruthless, cruel, power-hungry, and serious and calm under normal situations. In nearly all his encounters, Vilgax operates with the single-minded objective of acquiring the Omnitrix, which is the key to ultimate power.

Vilgax is a master strategist and will think of alternate ways to get things that he wants, such as tricking his enemy, if physical force is not enough. As such, he is a very convincing liar who will do whatever it takes to achieve to his goals. For example, he manipulated the Flame Keepers' Circle, a cult of humans who worship a deity baring an uncanny resemblance to his squid-like true form, into helping him escape Earth.

Vilgax wants to do everything without wasting time or effort, which is evident in him generally using drones to do his bidding and his calm fighting style with his carefully timed attacks and counters. Like the rest of his kind, Vilgax believes it is uncouth and childish to use his tentacles for fighting, preferring to keep his power controlled. He only uses his tentacles whenever he is either irritated with his enemy or seeking to perform a task more efficiently.[6]

Vilgax is often a backstabber and will turn on his partners once their usefulness comes to an end, as shown with his temporarily alliances with Dr. Animo, Albedo, and Eon.

Vilgax seems to learn a lot after his numerous battles with Ben, such as learning to ignore his quips and how to counter most of his alien roster. Because of this, Ben needs to rely on either pure power or something Vilgax has never tackled before to defeat him.

Vilgax is known to hold a grudge, most notably against Max Tennyson and his family for the great number of losses he has suffered at their hands.

Over time, Vilgax has more aggravated towards Ben emerging victorious over him to the point where his fighting style becomes more savage and ruthless. Ultimately, he has no trouble killing his enemies.

Correlating with hsi hatred of Ben, Vilgax disapproves of Glitch for being "more Tennyson [than] Mechamorph".

After escaping the Null Void, Vilgax seemed to have gone partially insane, as he was enraged more easily and exhibited facial ticks, though he appears to have recovered within years.

Despite his cruel and villainous tendencies, Vilgax does care about his own people by taking his role as Vilgaxia's ruler and champion very seriously. Therefore, he is willing to put his own life on the line and use whatever other means necessary to ensure Vilgaxia's and its people's safety, even if it means begging his enemies for help.

Vilgax is highly afraid of Ma Vreedle, and there is a rumor that she once made him cry.

By the time of Ben's partnership with Rook Blonko, it would seem Vilgax's cruelty and ruthlessness have reached new heights, best exemplified when he detonated a Chronosapien Time Bomb to destroy every universe in the multiverse except for No Watch Ben's timeline.

Vilgax as seen in the first season of the original series.

Vilgax after receiving his implants

Vilgax as seen in Alien Force and Ultimate Alien

Vilgax as a Lucubra hybrid

Vilgax as seen in Omniverse

Vilgax as seen in "Omni-Tricked"

Vilgax as Alien V, a Celestialsapien hybrid
Add a photo to this gallery

Retrieved from "https://aliens.fandom.com/wiki/Vilgax?oldid=194189"
Community content is available under CC-BY-SA unless otherwise noted.