Alien Species
Register
Don't have an account?
Sign In
Advertisement
in: Sapient Species, Magic: The Gathering Universe, Predators,
and 4 more 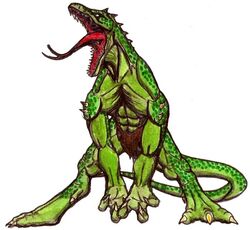 Viashino are a bipedal reptilian species hailing from the Great Desert of Jamuraa, a continent located on the massive plane of Dominaria. Their skin is most often a sandy or green colored, acting as camouflage in their natural environment. They range from 1 to 1.5 meters tall, and can weigh up to 67.5 kilograms. Each of their four-fingered hands sports small claws where most species have fingernails, as do their bird-like three-toed feet. These claws aid in climbing, and are truly effective in combat. They have a natural hunch to their wiry form, and a craning neck that gives their head nigh-360x360 degree rotation. Like the smaller reptiles they are related to, their eyes are slightly sunk into the sides of their ovular skulls, and they have no nose, simply nostrils at the front of their faces. The Viashino are naturally carnivorous, and sport a mouthful of razor-sharp teeth to prove it. Their keen senses and natural stealth, combined with their above-average agility, intelligence, and relentlessness, make them excellent hunters.

The Viashino are, in general, fairly somber and fatalistic, as the desert has claimed way too many of them over the millennia. They believe that all beings hold a great connection to nature and their ancestors, and thus respect reptiles and lizards, since they are their "fathers". They also believe the universe is a place where death could come at any time, so honor and accomplishment are extremely important. To a Viashino, one without honor might as well be dead.

They are nomads, wandering the desert, and forming temporary villages here and there. They are divided into several tribes, with various clans within these tribes. Supremacy is determined by trials of combat (similar trials are held when a Viashino male is to enter manhood), with the strongest male (called a "Bey") leading the tribe, assisted by a council of elders and 5 handpicked advisors. The Viashino live by strict codes of conduct, and the punishments for breaking their laws are but two: death and exile. Exile is held for the more serious crimes, such as murder and desertion, as the Viashino would rather die than live exiled in shame. The different tribes can be recognized by their weapons and the different patterns they paint upon their bodies. Over the millennia, there have been many different Viashino tribes, but the ones that exist today have been for over 500 years.

Viashino's speak in a language called Sand-Tongue. It involves hisses and growls, and low pitch murmurs.

The Beast Smashers are the premiere hunters of the Viashino. They have mastered either the destruction or the subjugation of almost every known animal in the Jamuraan desert. They have even managed to tame several of the fierce Viashivan Dragons, which are some of the most awesome and destructive creatures in existence. The traditional weapons of the Beast Smashers are the whip and the pike.

The Thought Shapers are the artists and scholars of the Viashino. They have developed ways to transform sand, rock, and bone into figures of loveliness. They keep the only written records of Viashino history and lore. The traditional weapon of the Thought Shapers is the dagger.

The Wind Riders are the Viashino's explorers, and have wandered far into the jungles and mountains that frame the Great Desert. They are forever moving, even more nomadic then the other tribes, so locating them is difficult. The traditional weapons of the Wind Riders are the Quarterstaff and the Spear.

The Sandstalkers are a special tribe. They are comprised of Viashino who share a common genetic variance; one which makes them holy figures to their people. Sandstalkers are born with dark green skin instead of sand colored, and are on average 1.5 to 2 meters tall and often weigh up to 112.5 kilos. Where most Viashino are wiry and sinewy, the Sandstalkers are stocky and muscular. Their heads are much more rectangular, and they have light spines which grow from the base of their skulls all the way down to their tails. The Sandstalkers are even more agile, strong, and stealthy than other Viashino, and have an amazing ability: they can blend into their surroundings instinctively, melting away so quickly they seem to vanish in plain sight. As far as is known, a female Sandstalker has never been born. When born, the Sandstalker is immediately taken from his parents, and brought to be raised and trained by the other Sandstalkers. The might and guile of the Sandstalkers have made them legends to the other sapient races of the continent. Some believe the Sandstalkers to be illusions; those with scars know better. The traditional weapons of the Sandstalkers are a pair of Scimitars.