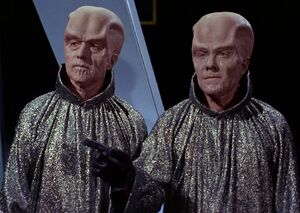 Star Trek
The Vians are a highly-advanced species of sapient, spacefaring humanoids. Their technology allows them to generate illusions, inflict pain or heal injuries of other beings, and to create forcefields.

Vians are hairless humanoids with large bulbous craniums, suggesting an enlarged brain. They seem to be immune, or at least highly resistant to the Vulcan nerve pinch.

In 2268, when the star Minara was about to go nova, threatening all life in the Minarian System, the Vians determined that they would be capable of saving the population of only one of the planets. Unsure of which species to save, they brought a female Anjurwan to the barren world of Minara II and developed a series of tests to see if her species would be worth preserving.

Retrieved from "https://aliens.fandom.com/wiki/Vian?oldid=163631"
Community content is available under CC-BY-SA unless otherwise noted.