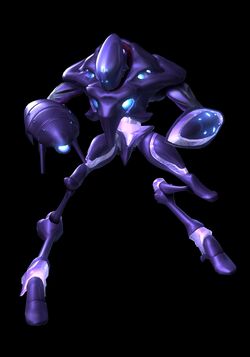 Metroid
The Vhozons are race of highly intelligent beings who are known for being peacekeepers.

Due to their homeworld, Vho, being subjected to sub-zero environments, they seem to possess highly insulated skin.

Another, perhaps far more fascinating, evolutionary adaptation is a spinning "secondary form", known as the Vhoscythe. This alternate form is used to keep the Vhozon warm, while doubling as an offensive tactic.

The Vhozons have high self-esteem and think of many others as being unworthy or criminal. However, Vhozons have contributed much to galactic society.