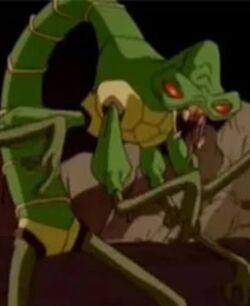 Men in Black
Vexrons are a sapient spacefaring species of long-lived nomadic insectoids which require high levels of radiation to reproduce.

Vexrons are slim insectoid bipeds with long segmented bodies, green skin, red eyes and four arms, and are well-known for their regenerative abilities.

They can attack by shooting off their own arms, which grasp opponents and tie them like ropes while the Vexron instantly pulls out another set of arms to replace them.

Vexrons live for approximately 980 years and thrive in highly radioactive atmospheres. While they don't require the radiation to live, they do require it to reproduce themselves, and need to be surrounded by high levels of radiation when they're born.

Vexrons are a nomadic species and use Metaphites to convert the atmosphere of alien planets into the radioactive mixture that they need to reproduce themselves.

During the 130 years period it takes for the Metaphite to mature inside its cocoon, a lone Vexron agent will be tasked with protecting the Metaphite and ensuring its eventual maturation.

Retrieved from "https://aliens.fandom.com/wiki/Vexron?oldid=180446"
Community content is available under CC-BY-SA unless otherwise noted.