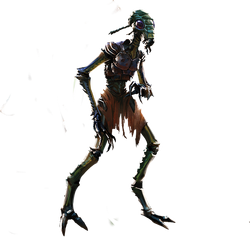 The Verpine are a species of sapient insectoids that live in the Roche asteroid field, unlike most other races which evolved on planets.

After discovering space travel, the Verpine began colonizing several asteroids in the Roche asteroid field, using the metals found on the asteroids to create various machines that the Verpine would sell across the galaxy, the most popular being the Verpine Shatter Gun. Unlike some insectoid species, such as the Geonosians, Verpine could be born force-sensitives, the most famous of which being Beyghor Sahdett, who became a Jedi and fought during the Clone Wars, later surviving Order 66 and falling to the Dark Side of the Force, becoming the first Inquisitor in service of Emperor Palpatine.

Retrieved from "https://aliens.fandom.com/wiki/Verpine?oldid=176957"
Community content is available under CC-BY-SA unless otherwise noted.