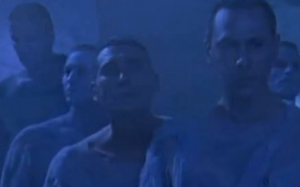 The Vergal are a race of blue-skinned sapient humanoids which require freezing environmental conditions.

Outwardly they resemble Humans, though their skin pigmentation is blue. In addition, unlike Earth's organisms, that thrive on heat to survive, the Vergal require cold temperatures to function. Being in a warm environment incapacitates them. They are a remarkably adaptable race, able to learn a language through just a few words of conversation or even through lip to lip contact. Their blood can also turn other species into Vergal. They are cold-blooded obviously and the female of the species lays eggs.

Vergal culture is in someways similar to hive or eusocial species likes ants or bees. Living in hollow cold meteors made of a substance that draws heat into it lowering the atmospheric temperature, the heat only released once making contact with water. They use these meteors as nests, the Vergal travel the cosmos seeking new worlds to settle and expand. Lord Roxton akin them to be a 'plague of frozen locusts'. They have only one female per nest that lays thousands of eggs, while the drones or males act out her will. However their loyalty to the queen only goes far as long as she's necessary. If a queen becomes unable to complete her duties, the drones will select a new queen, to continue their species. The Vergal view other forms of life, the Warm Bloods, to be inferior and their colonization of other worlds is a war of them.

During the early 20th century the Vergal contained within a massive fragment of a meteor, impacting the Maple White Land plateau. The survivors of the Challenger Expedition arrived that the scene to investigate, and entered the depths of the meteor discovering an unconscious blue-female. The headstrong Professor Challenger, believing it to be a remarkable discovery and specimen, took the female with them.

Unbeknownst to them, the meteor had other inhabitants that followed them to the Expedition's treehouse to retrieve the female. At the same time the meteor that impacted the plateau began to emit a cold front about ten miles in radius, turning the tropical environment into a tundra. The meteor inhabitants, unable to penetrate the electric fence surrounding the treehouse, laid in await until Marguerite and Roxton came out and attacked them, taking Marguerite. Back at the treehouse the female revealed herself to be Queen Zi-Zo of the Vergal and claimed her kind intended to conquer Earth through sheer numbers. Upon realizing her drones had captured a female, Zi-Zo demanded to be released and explained that her drones intended to replace her as queen.

Challenger learned that the substance that make the Vergal's nest was drawing the heat from the atmosphere, was a resistor that impedes the flow of electricity but stores the energy as heat. Seeing it as the answer, Challenger believed that using an electric current they could destroy the nest.

The two and Zi-Zo journeyed to the nest where Roxton and Challenger managed to rescue Marguerite and destroy the nest, restoring the plateau.

Retrieved from "https://aliens.fandom.com/wiki/Vergal?oldid=161478"
Community content is available under CC-BY-SA unless otherwise noted.