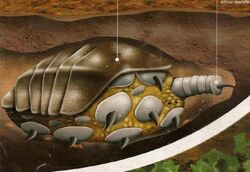 Superinteressante
Venusians are small fossorial organisms native to planet Venus. They breathe oxygen and feed on sulfur compounds and other mineral and organic substances of Venus' soil.

Venusians have many strong, extendable limbs with a sharp claw on the end, which they use to dig their way in the underground in search of nutrients and water. They also use these claws to avoid being carried by the strong winds when venturing on the surface. The upper part of their body is protected by a thick carapace made out of keratin, which protects the Venusian from the extreme heat and the corrosive acids of the planet's atmosphere. Because of the high concentration of sulfur compounds in the Venusian's body, the creature smells like rotten eggs.