"There's only one on Earth. They're nine altogether. The other eight are still on Venus. They're the sole survivors of a race that was born too soon. It developed in the eruptions and the boiling gases of Venus, a planet that won't catch up to Earth in perhaps a million years in climate."
―Dr. Tom Anderson 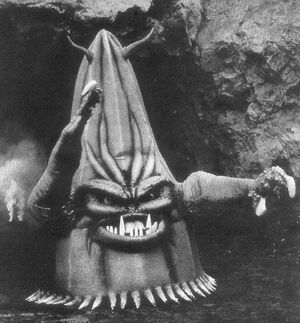 It Conquered the World

The Venusians are a sapient extraterrestrial species of conical shaped beings native to the planet Venus. As of the mid 20th century they are practically extinct, with only nine remaining individuals, one of which hijacked an Earth satellite and landed on the planet in an attempt to conquer it for future colonization.

The Venusian is a man-sized creature with a distinctly conical body, the base of which is equipped with short frills or tendrils which likely aid in locomotion. It has a menacing face on its torso, containing a mouth with sharp tusk-like teeth on the lower mandible; and a couple of eyes which constitute its weakest spot. It also has strong arms terminating on long chelae, capable of killing a human being with relative ease. From the top of its body protrude a pair of short horns or antennae, the function of which is not clear. They are also known to release small, manta ray-like flying creatures from the base of their bodies. Most likely bio-engineered (as they are referred to as "devices" rather than creatures), these flying organisms seek Human targets and bite them on the neck, releasing a small spike that allows the Venusian to control the victims' mind from distance. The Venusian is also highly resistant to gunshots.

Described as hyper-intelligent and lacking all kinds of emotions, the Venusian established radio contact with Tom Anderson, who convinced himself that the creature was benevolent and helped pave the way for the invasion. Anderson believed that the people affected by the alien mind control, and therefore emotionless, would inhabit a world free from war and misery. The alien also had the ability to somehow paralyze all sorts of technology within a large area, both electrical and fueled, except those belonging to its ally and the converted ones.

Retrieved from "https://aliens.fandom.com/wiki/Venusian_(It_Conquered_the_World)?oldid=150275"
Community content is available under CC-BY-SA unless otherwise noted.