"There must be a great deposit of crystals within a thousand miles, though I suppose those damnable man-lizards always watch and guard it. Possibly they think we are just as foolish for coming to Venus to hunt the stuff as we think they are for groveling in the mud whenever they see a piece of it, or for keeping that great mass on a pedestal in their temple. I wish they'd get a new religion, for they have no use for the crystals except to pray to."
―Kenton J. Stanfield 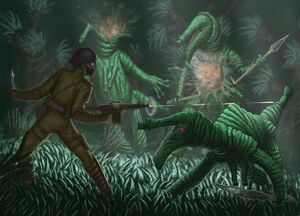 "In the Walls of Eryx"

H. P. Lovecraft and Kenneth Sterling
The Venusians are an intelligent, although seemingly primitive, reptilianoid species which inhabits the planet Venus. Vaguely humanoid in their bipedal posture, they build strange cities, towers and temples and religiously worship a type of crystal which the Human colonists on the planet use to obtain energy, resulting in conflict between the two species.

The average Venusian is about seven feet tall, although some are known to reach eight. They have slimy green skin, feet shaped like suction discs, and a tapir-like snout. Their eyesight is not very good at night. They have no easily identified vocal language, leading some to conclude that they're not sapient at all, and that their cities are the equivalent of "ant hills or beaver dams", despite the fact that they do possess some forms of technology, including swords and poison darts. Others have speculated that the complex movement of the four tentacles located on the creatures' chests function as a form of communication. It is also believed that they have some biological ability to detect the presence of their precious crystals nearby, for they have never attacked a Human who didn't possess them, and never failed to attack one who did.

They were eventually discovered to be a far more technologically capable species than previously thought. At some point in the past, they've managed to create a perfectly invisible solid material, with not the least bit of reflective or refractive properties; and used it to build a deadly invisible maze in the Plateau of Eryx, within which any Human being who enters is extremely unlikely to ever find the exit with no visual reference of the walls and passages.

Retrieved from "https://aliens.fandom.com/wiki/Venusian_(In_the_Walls_of_Eryx)?oldid=196635"
Community content is available under CC-BY-SA unless otherwise noted.