Venusians are extraterrestrial beings which originated on Venus, the second planet of the Sol System.

Native inhabitants of Venus are also a very popular concept in science fiction, having been depicted in many different forms ranging from beautiful humanoids to strange sulfur-based lifeforms. The subject has also attracted interest from both ufology and astrobiology community's. In spite of the harsh environment that's claimed to be on the planet, the existence of life on Venus or at least microbial life and also finding evidence of advanced lifeforms from the past such as a crashed flying saucer or something more unknown is still considered possible nowadays.

Historically, Venus has always been viewed with interest by early astronomers. The fact that it is closer to the sun, has no moon near it and is entirely covered in dense clouds gave the idea of a hot, moist tropical world, which in turn gave an idea of a wasteland. Early science fiction stories had often depicted Venus as a swamp planet, a primitive world similar to what Earth might have been in the Carboniferous period. Another popular theory was that Venus could be a world completely covered by oceans, either made of water or of other substances.

The true nature of the planet was not revealed until the late 1950s, when astronomers were able to measure the temperature of Venus and found out that, thanks to a gigantic greenhouse effect caused by the high amount of carbon dioxide in the atmosphere, the temperature easily reaches more than 450ºC on the surface of the planet. This means that life as we know it is probably impossible, at least on the surface.

However, astrobiologists say that there is still a good chance of finding microorganisms living in Venus' clouds, where the temperature is much more appropriate. The existence of microbes living permanently in Earth's clouds seems to support this idea. By analyzing the atmosphere of Venus, scientists have found evidence that biological activity seems to be going on.[1] Also, we know now that Venus was once an Earth-like planet covered by oceans almost similar to Mars, so it is possible that life did exist there in the past.[2] 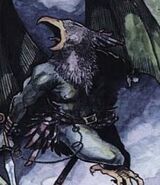 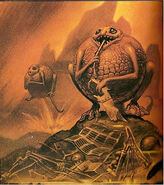 Oucher-poucher
(Picture Atlas of Our Universe) 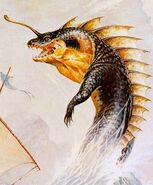 Venusian
(In the Walls of Eryx) 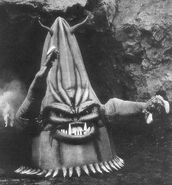 Venusian
(It Conquered the World) 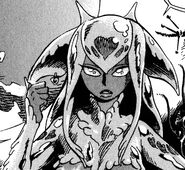 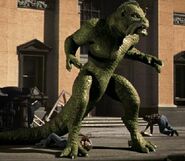 Retrieved from "https://aliens.fandom.com/wiki/Venusian?oldid=151444"
Community content is available under CC-BY-SA unless otherwise noted.