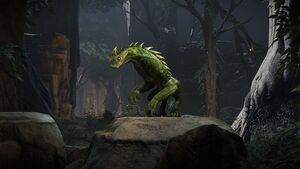 Evolve universe
Venom Hounds are very small, chimp-sized carnivores native to the jungles of Shear. Despite its namesake, it more resembles a reptilian primate rather than a canine. Traveling in packs to find food, similar to Trapjaws, the Venom Hound gets its name due to its venomous bite, which allow it to hunt down animals far greater than itself. The venom is transmitted through it's pincher-like beak - venom strong enough to cripple animals triple its size.
Retrieved from "https://aliens.fandom.com/wiki/Venom_Hound?oldid=171466"
Community content is available under CC-BY-SA unless otherwise noted.