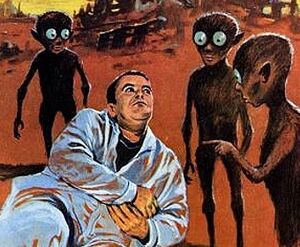 Clifford D. Simak
The Venerables are an intelligent race of short, furry creatures indigenous to the planet Mars. In spite of their sapience, they have been hunted to near extinction by Human settlers who prized them for their fur.

Venerables have seven biological sexes, all of which are necessary for reproduction. For that reason, they always travel in groups of seven, consisting of one individual of each sex. They have owl-like eyes and shimmery fur with blue and red patterns.

Although they're capable of speaking broken English, they communicate mostly by telepathy among themselves, and are also capable of using telepathy to communicate with other species to some extent.

Retrieved from "https://aliens.fandom.com/wiki/Venerable?oldid=186393"
Community content is available under CC-BY-SA unless otherwise noted.