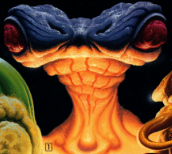 Significantly taller than a Human

Animorphs
The Venber are a near extinct race of non-carbon-based lifeforms from a frozen moon called Venbea.

The Venber weren't carbon-based lifeforms, and were susceptible to melting at room temperature. They were eight-feet tall (~ 2.4 m), humanoids, with heads shaped like a hammerhead shark with big, dark globs on each side for eyes, and flashes of blood-red and midnight-blue running along their flanks, shoulders, and converging in their faces.

They have two thick upper arms growing out of their broad shoulders. Their upper arms split at the elbows to make two forearms and they use two of their forearms, one right and one left, to propel themselves forward like ski poles on their ski-like feet. They are also able to use echolocation to locate and see objects and creatures. The substance Venber are composed of has many uses, one of being used as a powerful super-conductor.

The Venber were a primitive race from the frozen moon of Venbea, They were one of the earliest evidence the Andalites obtained of life beyond their own planet at the dawn of Andalite space travel.

The Yeerks later managed to retrieve Venber DNA from Venbea and used it to genetically recreate them using Human DNA. These newly resurrected hybrids were used as guards and labor for the Yeerk's Arctic Kandrona base. Due to their unique physiology, Venber were unsuitable hosts, so the Yeerks had microchips put into the head of the new Venber, making them completely obey the Yeerks.

The Animorphs managed to destroy the Arctic base, destroying the Kandrona generator as well as the machines controlling the Venber. The status of these Venber is not known, but it is possible that a few still exist, wandering the Arctic.

Retrieved from "https://aliens.fandom.com/wiki/Venber?oldid=182213"
Community content is available under CC-BY-SA unless otherwise noted.