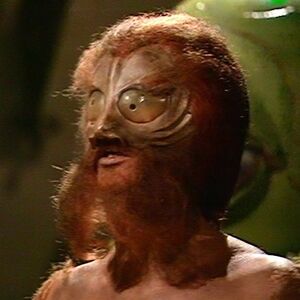 Vegans are a humanoid species recognizable for their large eyes and large amounts of body hair comparing to Humans. Physically strong and possessing infrared vision, they are famous for their ability as miners.

They consider themselves a highly practical race which doesn't hold superstitions or mysticism and are always in favor of using new technology, at least in mining operations. As of the 40th century, the people from Vega were members of the Galactic Federation.

According to a K9 novel (K9 and the Beasts of Vega) the Vegan system is also inhabited by beings made of pure energy; but the relation between these and the corporeal, non-superstitious Vegans remains unexplored.

Retrieved from "https://aliens.fandom.com/wiki/Vegan_(Doctor_Who)?oldid=175353"
Community content is available under CC-BY-SA unless otherwise noted.