Alien Species
Register
Don't have an account?
Sign In
Advertisement
in: Ben 10 Universe, Sapient Species, Races of the Milky Way Galaxy,
and 26 more 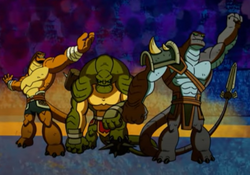 Ben 10
Vaxasaurians are a race of humanoid dinosaur-like aliens from the planet Terradino.

In their base size, Vaxasaurians resemble humanoid dinosaurs with four-fingered ape-like hands, three-toed elephant-like feet, white almost Human-like teeth with some fangs, eyes that either lack pupils or have cat-like pupils, and eyebrow-like extensions on their foreheads.

Male Vaxasaurians have tan, brown, beige, dark green or gray skin with their underbellies, the front side of their necks, and sometimes the sides of theirs arms that face the body being lighter-colored.

Females have medium red skin and slightly darker underbellies. Their chins are slimmer and they have stripes around their body that are a darker shade of their skin color. They also appear to have feminine mammalian traits.

When at full size, Vaxasaurians gain Stegosauride plates on their backs and thagomizers on the tail. Three plates on their shoulders separate and grow alongside the plates on the forearms. A small triangular extension on the top chest plate forms on the bottom while the bottom sides stretch down and curve towards the center, ending at a point. The legs also seem to become slightly longer.

Much like Earth dinosaurs, Vaxasaurians reproduce by laying eggs.

Vaxasaurians are preyed on by Kaosseffexx Ultimasaurias, especially since they are unable to lift them for long periods of time, and can be trapped by their webbing.

Vaxasaurians can grow their size at will, making their dinosaurian features pronounced. They can sometimes generate their Stegosauride features without having to change their size. They can even shrink down to about 10 feet (~ 3.04 m).[2]

Vaxasaurians are skilled in gladiatorial combat and possess tremendous superhuman strength for their size, allowing them to throw objects into near-orbit, lift a To'kustar even in their base height,[3] fight on-par with other beings around their size, such as Tiny's Species, Acrosians, Detrovites, Appoplexians, and Perplexahedron guards. Technically speaking, they are physically stronger than Methanosians and Crystalsapiens.[2]

A Vaxasaurian's thick hide makes them durable against most attacks. For Omni-Kix and Omni-Naut Vaxasaurians, their natural durability is increased thanks to their respective armors.

Vaxasaurians are quite agile for their size, being able to perform tackle slides and evade attacks while jumping.

Certain Vaxasaurians seem to have naturally-occurring weapons on the ends of their tails that resemble a plethora of medieval weaponry including maces, swords, war hammers, and battle axes.

Vaxasaurians can produce shockwaves by either clapping their hands together[4] or slamming their tails (especially those with weapons) against the ground. These shockwaves can blow away those affected within its vicinity.

Due to the alterations Kevin Levin has made to the Antitrix, Humungoraptor is more powerful than ordinary Vaxasaurian. He also has natural armor akin to an Evolved Vaxasaurian's, sharp claws and teeth, and can fire powerful energy beams from his mouth.

Omni-Kix Vaxasaurians can absorb energy through their back spines with every impact or attack they make. Once enough energy has been gathered, they can fire powerful green energy blasts from their mouths.

Besides space survivability, Omni-Naut Vaxasaurians can breathe underwater thanks to their armor[5] and fly through the use of their jetpacks.

When under the effects of an Earth cold, Vaxasaurians can accidentally sneeze out sprays of slimy snot from their mouths.

A Vaxasaurian's large size makes them very slow, unable to fit in tight places, and an easy target for enemies.

Vaxasaurians are primarily built for terrestrial land, meaning they require oxygen to survive. Consequently, they are unable to breathe underwater without Omni-Naut armor or some other form of equipment.

Correlating with their need for oxygen, Vaxasaurians are limited to holding their breath while in space.

Vaxasaurians can be harmed by electricity, such as an Amperi's attacks. They can also be harmed by fire even when at full size, such as the attacks of either a Methanosian or a Pyronite.

There is a clear limit to a Vaxasaurian's natural durability, as they can feel pain from an Aerophibian's neuroshock blasts and having their tails bitten by Bashmouth's Species.

Despite their enhanced strength, Vaxasaurians are unable to lift anything bigger than a Kaosseffexx Ultimasauria. Technically speaking, they are physically weaker than evolved Vaxasaurians, Atasians, Chimera Sui Generi, and Tetramands.[2]

Vaxasaurians can be lifted by a species with as much strength as Prypiatosian-Bs and Trombipulor's Species.

A Vaxasaurian's tail weapon can accidentally cause collateral damage and make them injure themselves.

Vaxasaurians are unable to create shockwaves if they slam their tails on soft surfaces such as mud.

Omni-Naut Vaxasaurians can be knocked out of the sky if their jetpacks take enough damage.

If under the effects of an Earth cold, a Vaxasaurian's natural strength and stamina are severely reduced.

The inhabitants of Terradino have not evolved to live here together peacefully. Warring factions in every group constantly seek to wrench control of society for themselves. Fortunately, the Vaxasaurians have been able to temporarily restore order through their sheer physical superiority.[6] However, there are still worries that the violence and chaos will return and destroy their beautiful planet once and for all.[7]

Vaxasaurians are more technologically advanced than Humans, as they can travel through space and engage with other species.[1]

Vaxasaurians can occasionally be seen in clothing. The attire can include caveman-like loincloths, stone-based accessories and/or bones and skulls of other species.

Like Humans, a Vaxasaurian can develop a need for glasses. 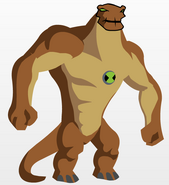 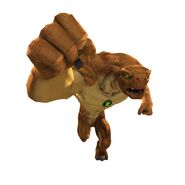 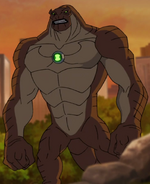 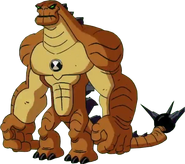 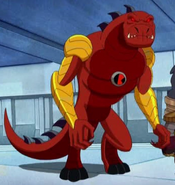 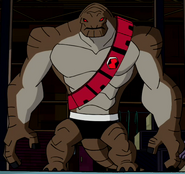 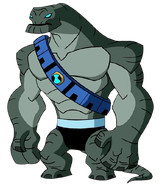 The Alpha Nanite as Humungousaur 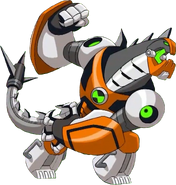 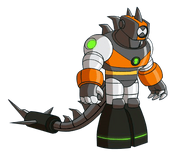 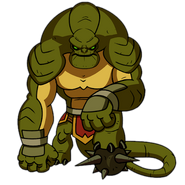 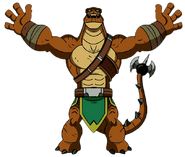